This item is available on the Militant Islam Monitor website, at http://www.militantislammonitor.org/article/id/343

Theo van Gogh talks about his book "Allah Knows Best" "I like functional insults - Last film : 0605 about the murder of Pim Fortuyn premieres in Holland

Scroll to the bottom of the page to see bigger poster and an announcement of the book and the foreword .

Theo van Gogh was fired as a columnist for his crude remarks everywhere he was employed. The collected articles which he published last year on his website have been made into a book which is selling briskly. We spoke to the enfant terrible' about "the Fifth Column of goatfuckers' and political correctness.

When you recently went to to sign your book you were advised by the AIVD( The Dutch Intelligence and Security Services) to have a body guard. Are you ever afraid that you will go so far in your columns that someone will want to physically attack you in response?

"That whole story in was somewhat strange .I thought that the AIVD was there to protect citizens like me. But, yes, we saw how that worked in the case of Fortuyn.(1) And the threats? This time they were coming from extreme Islamist groups.It only shows how abysmally low the level of civilization is in some circles.I won't let these people silence me."

A reviewer wrote about your columns that she could continue to immerse herself in your train of thought until you begin to shout; "poop and piss", and she got turned off. Aren't you afraid that your strong use of language distracts from your message?

"My use of language is part and parcel of my message".

I like to be functionally insulting' .If I call someone a 'goatfucker' or a 'pygmy on platform soles ', that is for a reason. And, well, I have as it were a small message.I want to warn against the Fifth Column which is trying to hinder our free way of life in . The more light hearted I write about that , the better the message gets through.I would not be able to pen an academic and dry diatribe .I have too much talent for that".

In your columns you rail against everyone and everything. From Frits Barends(2) to Thom van de Graaf(3) ,to fundamentalist Muslims, and Mayor Cohen of . Does that offer you some type of relief ?

"No,originally I thought that writing articles would keep me from having to see a psychiatrist,but I became even more depressed as a result. As soon as you sit down to write about something you are pressing your nose deeper into the sewer of facts. If I were still twenty years old ,I would really move to . That is the only country where they still hold freedom in very high regard".

Do you have any hope for the future of ?

"Ah,I hope to live to 87 and drink from the the goblet of life to the dregs. But to say that I want to live in a country which is cowering under the political correctness of censorship and where the goatfuckers are calling the shots, then no ,not that ."

This kind of statements and these type of characterizations have been the reason behind your having been fired from every job you have had as a columnist.Is that why you have started writing on your website The Healthy Smoker'?

"Yes, I wanted to have a place to say what I wanted to say. And to my own pleasant surprise I am getting about 30,000 hits a week. That's a lot more readers then the Groene Amsterdammer (5), which is kept afloat by public funding. And my collection "Allah Knows Best" is now in it's third printing".

1)Pim Fortuyn ran for prime minister and was shot to death by an 'animal rights terrorist' in 2002 http://www.militantislammonitor.org/article/id/319

(2) Theo van Gogh called Mayor Cohen a collaborator like those during the WWII. In one of his last articles called Our Mayor', he criticized Cohen for engaging in dialogue with Islamists after 9/11 writing : Muslim were dancing in the streets of celebrating the attack of the Great Satan . Mayor Cohen went into the mosques and assured the Muslims "You are one of us" instead of asking them "What are you doing here?" http://www.militantislammonitor.org/article/id/309

(3)Thom van de Graaf is an actor who invokes the spectre of the Holocaust and the name of Anne Frank whenever anyone discusses the threat of militant Islam Holland. After Theo van Gogh's murder van de Graaf started an' orange armband' action, hoping to sell millions of armbands at one euro a piece which were intended to show the wearer was full of tolerance and respect for  the diversity of people  in Holland. http://www.militantislammonitor.org/article/id/328

(4) Frits Barends is a Jewish television commentator who accused Theo van Gogh of being an anti semite and whom Theo then called "a semi literate who imbibes other people's ideas with the gasping motions of a fish on dry land".) http://www.militantislammonitor.org/article/id/311

Right: The cover of Pim Fortuyn's book "The Islamisation of our Culture" -"Dutch Identity as Fundamental" 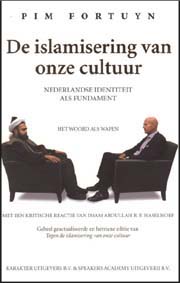 MIM: Theo van Gogh's film premiered on 12/13/04 in The Hague .The film called' 06/05' was a reference to the date of the murder of Pim Fortuyn. According to reviews Theo van Gogh's film insinuates that the AIVD was part of a conspiracy in the Fortuyn murder because they were against his involvement in certain business dealings . His murderer said he did it to "protect Muslims".

For stills of the film and a 'Video Diary' see:

The last movie made by Dutch film director Theo van Gogh before he was brutally killed by a suspected Islamic extremist in November premiered in The Hague on Sunday.

The movie, called '06/05', deals with another notorious assassination in the Netherlands, the murder of right-wing populist Pim Fortuyn in May 2002.

Like Van Gogh, Fortuyn was an outspoken critic of Islam. The flamboyant politician was shot five times at close range as he left a radio studio in the central town of Hilversum on May 6, 2002, just 10 days before general elections with his far-right party set to make sweeping gains.

Van Gogh's movie mixes real images of the day of the murder with a fictional story of a conspiracy by Dutch intelligence services to silence the politician.

In July last year a 34-year-old animal rights activist was sentenced to 18 years in jail for the murder of Fortuyn. The courts ruled that he had acted alone.

"The movie is not just a homage to Fortuyn but also to Theo (van Gogh)," leading lady Tara Elders said on Sunday.

Van Gogh, a distant relative of the 19th century painter Vincent, was cycling to his production firm to add the finishing touches to his movie when he was shot and stabbed in broad daylight. Police have arrested Mohammed Bouyeri, a 26-year-old man of Moroccan descent with alleged extremist sympathies.

Initially '06/05' will only be available through the internet site of Dutch firm Tiscali where it can be downloaded for a fee. The film will come to Dutch movie theatres in January.

Internet provider Tiscali has made a deal with an international provider who will distribute the movie in the United States, Canada and Australia.

MIM: On the day which Theo Van Gogh's last film premiered, under tight security in The Hague, Minister Brinckhorst of Economic Affairs blamed Van Gogh and scriptwriter Hirsi Ali for angering Muslims stating that the film never should have been made.This display of abject dhimmitude by blaming the victim of a terrorist murder for inciting the killer by their existence is indicative of those in Dutch politics who, like Amsterdam Mayor Job Cohen, are desperate to placate the Islamists in order to "keep things together" and avoid confrontation at any cost. This is an example of what Theo Van Gogh meant as a reason to emigrate to the U.S. when he said in the interview above that he didnt want to" live in country which is cowering under the censorship of political correctness, and where goatfuckers are calling the shots."

Minister Brinckhorst of Economic Affairs called the making of the film Submission by Theo van Gogh and Lower House member Hirsi Ali unwise. The D'66 policy maker said this in an interview which appeared in Vrij Nederland this Wednesday.

"When I saw the film I thought"uh oh, how will this finally end?" You know what happens when you light a cigarette in a munitions dump. Such a film is permissible, but unwise.I can understand that Muslims were upset by it.Don't blame me! Who is being naive here ? according to Brinckhorst.

Minister Verdonck (integration) does not agree with Brinckhorst.She said in her reaction that she always had stated that the film was a form of free speech. But Brinckhorst finds that it has "nothing to do with freedom of speech"."If I scream at my neighbor the whole day "rotten whore" she will be angry". "I shouldn't be surprised at that"."The situation is delicate with so many different opinions"."If you continually yell that you are right and that you want to be seen as right, you are contributing to a climate in which solutions are no longer possible". "That is my opinion and I will continue to defend it".

Brinkhorst is "against saying everything without limits " You have to think before you call someone a rotten fish .I cant hear the word "cunt Moroccan " anymore . And the I cant get the term "goat fucker " over my lips. Every day on television there are words which are being used about which I say.; They are provocative." They are vulgar,that don't have anything to do with the problem.People are being pitted against each other .If I can only exercise my freedom of speech by humiliating you then I am acting irresponsibly.And that has to be said out loud. I don't believe at all that everything is permissible".

Brinkhorst also said in an interview that the time is ripe for a new movement. "My idea is more in line with a movement which is a counter weight to popularism.The members can come from different groups.It it time for a new call to society,like D'66 did in the sixties.At that time it was about the outmoded political structure,now it should be about keeping together the society. About the active promotion of the European idea."

This item is available on the Militant Islam Monitor website, at http://www.militantislammonitor.org/article/id/343