This item is available on the Militant Islam Monitor website, at http://www.militantislammonitor.org/article/id/509

MIM: 'Praying' to the cameras.

MIM:The view from outside - straight from central casting:

"...Heard some commotion coming from inside and then watched a bearded guy yelling "Allahu Akbar!" while security whisked him out. All the camera crews chased out after him. From the other side of the gate, he put on a showif this was any country besides America, they'd hang her, that kind of thingand gave the reporters what they wanted..." http://www.muslimwakeup.com/main/archives/2005/03/by_michael_muha.php

MIM: The 'prayer service' lead by a woman was announced to the media by the Progressive Muslim Union a group of extremists who masquerade as faux moderates. It appears that the media once again took the group 'at face value' when reporting on the much hyped prayer service publicity stunt designed to bring traffic to the MWU website and drive up demand to have Wadud's book reprinted.

The PMU and by extension the website Muslim Wake Up are nothing more then an Islamist group for not strictly religous ( as opposed to moderate) Muslims whose political agenda supports terrorism. The network of 'Progressive Muslims' issued this statement dismissed the joyful killing and mutililation of the bodies of four Americans by Muslims in Fallujah, but expressed their being "heartsick" over what they termed the "destructive military devastation of Fallujah".

"...As we celebrate the ending of Ramadan and the Feast of the Breaking of the
Fast, we, the undersigned members of the Network of Progressive Muslims, which has members on all continents of our planet, are heartsick about the destructive military devastation of Fallujah in Iraq and the Darfur region of Sudan taking place during this blessed month..."

"...The targeting of the city because of its supposed character as a "stronghold for insurgents" seems nothing more than simple revenge for the mob displaying of the already dead bodies of the four mercenaries that took place several months ago. .." http://www.muslimwakeup.com/main/archives/muslim_issues/index.php

MIM:Further evidence of the radical Islamist agenda of the PMU is that one of it's founders, Hussein Ibish, refers to Hizbollah as a "legitimate military operation" Ibish, who proclaims that he is "hedonistic, debauched, and proud of it" was the head of the American Arab Anti Discrimination Committee, before joining the staff of the Lebanon Star newspaper. The advisory committee of the PMU includes Tariq Ramadan on their advisory board. Last year Ramadan was barred from entering the US to take up a professorship on grounds that he posed a 'security risk due to terrorism related activities'.

Faux moderate Muqtedar Khan is also on the advisory board of the PMU : After 9/11 he jokingly " worte that as soon as it became clear that Muslims were behind 9/11, I told my wife there goes my chance to be this country's first Muslim Henry Kissinger..." http://commentpmuna.blogspot.com/2004/11/text-of-comment-on-formation-of-pmuna.html

For more on Muqtedar Khan see:

others listed as invited (but not on board) include:

For more on the PMU and MWU see: "The Propagand'agressive' Muslim Union - Islamists in Yuppie clothing and Muslim Wake Up - Sex in the Umma" http://www.militantislammonitor.org/article/id/331

"...For me, Islam's ugly secret is that our Black Stone was originally in a vagina-shaped shrine to Al-Lat, but someone ripped it out and stuck it in the corner of a chubby stone dick...." http://www.muslimwakeup.com/main/archives/2005/03/by_michael_muha.php

"...When she leads men in prayer... it's not proper for them to look at the woman whose body is in front of them," Sayed Tantawi wrote in a column for the Egyptian newspaper Al-Ahram.

"...women should not lead prayers because "the woman's body, even if veiled, stirs desire..." 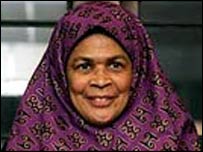 MIM: Number one on 'Top Ten' list of reasons for upholding Tantawi's fatwa against men looking at the body of a woman in front of them...

In 2005 Wadud enlightened an audience in Toronto telling them:

"The fact is I am a nigger and you will just have to put up with my blackness."

MIM: Some Toronto audience members claimed afterwards that "they had come
with the best of intentions to learn but they were too frightened to ask
questions because of the fear of being accused of racism and/or sexism.
One of them quite rightly mentioned, that Prof. Wadud "yelled at some" and
yet greeted a "flamboyant" South Asian male audience member (possibly a
friend of hers), with "darling, where have you been?"

MIM: The commentary in the Muslim community by both woman and men blamed this hyped non event on a foreign conspiracy orchestrated by the enemies of Islam. Note that it is implied that infidels are using secular Muslim organisations to undermine Islam.http://news.bbc.co.uk/2/hi/americas/4361931.stm

Saleh, the Al-Azhar professor, also suggested the prayer was a ploy to weaken Islam. "It's a foreign conspiracy, through secular (Muslim) organizations, to sow seeds of division between Muslims, to come up and preach with American or contemporary Islam," she said. "But God will protect his religion." http://www.cbc.ca/cp/world/050319/w031924.html

* Saudi Arabia, Grand Mufti Abdul-Aziz al-Sheik spoke out against it in Friday prayers at a Riyadh mosque.

"It's a time when people can get away with anything," Haddad said. "When people have a breakdown of traditional leadership, largely because the U.S. government has delegitimized the Muslim leadership in America, American Muslims are searching for new leaders more able to address their daily needs. http://www.guardian.co.uk/uslatest/story/0,1282,-4875611,00.html

*"..This crowd might be too "culturally" Muslim and too genuinely open-minded to produce too many imams, with or without penises. And for some it might just be a watered-down Islam for liberal chickenshits..." http://www.muslimwakeup.com/main/archives/2005/03/by_michael_muha.php

MIM :PMU co founder and former ADC (Arab American anti Discrimination Committee director Hussein Ibish (now a writer for the Daily Star in Lebanon), is an avowed secularist who epitomises the PMU's Islamofacist 'blut und spelen' weltaanschauung when he says that Hezbollah is, " a legitimate military operation .Ibish, a gay Marxist who is also a convert to Islam, advocated sex between students and teachers while an instructor at a university and once proclaimed that;"I couldn't be more hedonistic,debauched, and proud of it!"

According to Dr. Daniel Pipes in his article "Failing to Find Moderate Muslims at the Progressive Muslim Union" :

"Nov. 15, 2004 update: Today is the official launch of the Progressive Muslim Union. The press release marking this event makes the right noises:

PMU has been formed in recognition of the urgent need for greater and more coordinated articulation of the pluralistic and compassionate sentiments of vast sections of the community.

Our goal is to celebrate Islamic traditions that encourage free inquiry and multiple, competing and mutually respectful readings of the faith, which valorize free choice rather than an atmosphere of compulsion in religion, and which maximize the range of options for the faithful.

...But the real agenda seeps through the sweet talk:

PMU will defend the Muslim community from the calumnies of those who seek to insult and degrade Islam and/or the Muslim community, in particular the relentless campaign of defamation from some evangelical preachers, like Jerry Falwell and Pat Robertson, or from supporters of the extreme right in Israel, like Daniel Pipes. http://www.muslimwakeup.com/mainarchive/001541.php#more

Al-Marayati, Eltantawi, and Ibish have long pretended not to see the difference between those (like Falwell and Robertson) against Islam the religion and those (like me) against radical Islam the totalitarian ideology, no matter how many times I make this distinction. The misrepresentation of my position is further proof that PMU is just another group apologizing for extremism, even if a bit more elegantly wrapped than the Council on American-Islamic Relations and the Muslim Public Affairs Council can manage.

It bears remembering that at first, CAIR and MPAC were also seen moderates; and just as it has taken years for their true colors to be discerned, so will it take time for PMU's real nature to be perceived. But it will be... " http://www.danielpipes.org/blog/361

MIM: More multi kulti run amok and tax payers euros down the tubes (no pun intended) with the first 'women's mosque three year project theater excuse for a subsidy for minority activities'. The event included a women chanting the Adhan (the call to prayer) in the center of Amsterdam's busiest public venue - The Leidseplein.

Not to be outdone by their 'sisters' in the US Islamo feminists in Holland upped the ante and held the first "Women's Mosque" in a theatre which had been transformed into a mosque. The event was meant to be more art then an 'imitation of life', and is part of a subsidised project which is supposed to 'change awareness of women's role in Islam'. The left wing liberal agenda of the project is evident in that it is an elitist group of professional women involved in the project with a left wing liberal agenda which will neither appeal to, nor attract the often poorly educated or illiterate religous Muslim women whose plight they claim to highlight. The group's contempt for established religion and left wing agenda was revealed by the 'founder' who stated:

"..Usually it is men who wield the scepter in the mosque, on Saturday evening it was the women's turn.."

"... Muslim feminists launched a three year project from The Balie (a theatre) and the Institute for Multi Cultural Development for a beter emancipation of women with an Islamic background..."

"...The woman's mosque is meant to be tongue in cheek endeavor and serves as a type of art project. According to the organisers it also attests to the fact that a change is needed . " Let the women's mosque be the corner of the veil which is lifted."

The 'warm and fuzzy' nature of the event was onderscored by ex Egyptian presidential candidate El Sadaawi who said "Everyone is the same, we all must work together to make a better world."

"...The organisers had left some space free at the back of the room for men to show their broadmindedness..."

This item is available on the Militant Islam Monitor website, at http://www.militantislammonitor.org/article/id/509