The story of Arafat's birth

"Human beings might stoop to bless a creature so evil -- as indeed Arafat was blessed, with money, deference, even a Nobel Prize -- but God, I am quite sure, will damn him for eternity." http://www.boston.com/news/globe/editorial_opinion/oped/articles/2004/11/11/arafat_the_monster/

MIM: Yasser Arafat appears to have finally succumbed to AIDS or some other related disease. http://www.nypost.com/news/worldnews/34488.htm

"The 1970's dossier of a former Romanian intelligence officer - Lt. General Ion Mihai Pacepa  dealt with Arafat, who went by the name of Rahman Al Qudwa. Pacepa described the story of the forging of Arafat's personality as - "an incredible account of fanaticism, and of homosexual relationships, starting with his teacher when he was a boy to his Swiss bodyguards." http://www.jerusalem.indymedia.org/news/2002/05/26364.php?l=ar

MIM: In keeping with the spirit of the terrorist's demise MIM is publishing Theo van Gogh's piece on Arafat and his aging groupie Gretta Duisenberg, wife of the ex European Bank president Wim Duisenberg who went to Ramallah to offer her body as Arafat's human shield. http://www.militantislammonitor.org/article/id/15

"Arafat's hideous but successful life  who else has ridden the murder of children and holiday celebrants to a Nobel Peace Prize and a personal fortune  is worthy of a full-length documentary. For the moment, HonestReporting.com's one-minute version, "Arafat's Dark Legacy," is a good start." http://www.danielpipes.org/

"Got that ? The farce is complete and Arafat dies as wretchedly as he lived..."

Yasser Couldn't Get it Up - Jasser kreeg een slappe plasser

Theo Van Gogh is a Dutch writer and filmmaker based in Amsterdam .He is also a great grand nephew of Vincent's brother by the same name. His most recent book is entitled "Allah Weet Beter" -"Allah Knows Best", and contains his observations on the Islamisation of Holland which he calls: "The beginning of a new Dark Ages of Mecca". http://www.theovangogh.nl/allah_weet_1.html

MIM: Theo van Gogh was murdered by a militant Islamist terrorist on 11/2/04 http://www.militantislammonitor.org/article/id/310

YASSER COULDN'T GET IT UP

A short time ago my colleague Luuk Koelman, wrote that Gretta Duisenberg was lying in bed with Yasser Arafat who most likely could not get an erection. Though it was never proven, it sounds highly plausible. I would never have paid any attention to to this if Mrs. Duisenberg had not become outraged and gone to court, further publicizing the scandal and demanding restitution of her good name.

I am also proud of my good name and understand those who dedicate their lives to their fellow man, and the sake of other idealists, such as downtrodden Palestinians who dispatch human bombs into discoteques to kill children.

This being the case, I would like to say something positive about her in this paper. First of all, the older she gets the more she begins to resemble Cruella de Ville, the woman in the cartoon film of 101 Dalmatians who wants a fur coat made out of the skins of cute little puppies. I love that character.

Secondly, more respect should be accorded Mrs. Duisenberg regarding her unpublicized reputation.

The most colorful anecdote in this regard involves the then Minister of Defense, Hans van Mierlo, who landed in Gretta's bed as man of the world. During their tender lovemaking they were cruelly interrupted by an intruder, who caught them in flagranti delicto ,and handcuffed them naked to the radiator. Gretta's lawfully wedded husband, Mr. Bedier de Prairie, returned around noon. Gretta is no slouch. In the meantime panic had erupted in The Hague, because Mr. Van Mierlo unfortunately, had failed to appear at the NATO conference.

I have heard this intriquing story doing the rounds among parliamentary journalists ,who whispered it snickering into my ear. If this was because my informants made it up, then I offer my apologies to Mrs. Duisenberg in advance. If it turns out to be true, then I bow to her as a sign of respect. Even though Mrs. Duisenberg possesses an unfailing talent to hang out the wrong flag, as a result of having been on the wrong side during the war, and allows herself to be harnessed to the carriage of totalitarian regimes, one has to admit she has guts. At the same time she was bedding Hans van Mierlo, she was also sleeping with Phillip Agee, who betrayed many of his colleagues to the KGB and in doing so signed their death warrants. I think there is something romantic about a woman who falls in love with a traitor.

Thirdly, I don't believe that Mrs. Duisenberg is an 'anti semite', as those who hate her and her sympathies for Arafat and his followers claim. With some friends people don't need any more enemies, and Mrs. Duisenberg is undoubtedly one of Israels best allies.

A question of innate gullibility.

Fourthly, When Madames two drug addicted sons were caught dealing drugs in Thailand, both were smuggled out of the country thanks to the bribes paid by the president of the European Bank . Mrs. Duisenberg could not resist the temptation to talk to the leading newspaper, who promptly put the story on their front page. It doesn't take much to imagine how this story endangered other Dutch citizens who are sitting in jail on smuggling charges.

Mrs. Duisenberg does not comprehend that, and shows herself more then ever to be the amateur performer who is willing to climb over bodies to get to the top.

Will she go to the court as a result of this piece?

She has my sympathy.

Gretta Duisenberg is lying on her cot, in the Arafat's ruined compound, somewhere in Ramallah. She is wide awake. Her bare feet are sticking out from under the covers. She can see her polished red toenails which match her white satin night gown. The sound of an ambulance echoes in the distance. Her travel clock indicates that it is exactly 6:12 .

Yasser Arafat is lying on the cot next to her, the man for whom she is prepared to give her life as a human shield. She wants to be with him day and night. Gretta thinks about his mental stamina and of that of the Palestinian people, who have been fighting the occupation for so long.

She thinks about the uneven struggle.
Yasser and his people against the helicopters and the tanks of the Israeli army.

Arafat is sleeping like a baby. He snores with pleasure. What a darling!

Gretta carefully leans over Arafat's face. She studies his grey and white beard stubble, his blubbery lips, and the wrinkled black and white checkered cloth on his head. He appears exotic, unkempt, his chest rises softly up and down under the blankets.

Yasser turns in his sleep. He stretches, sighs, and pushes his knee sharply against her thigh. Gretta's body begins to tremble. She hasn't had this feeling in years. The thrill of the forbidden !

What should she do?

Yasser isn't a man that you just take into your arms. Anyway, he's much too small for that.

Again she feels the raw touch of his knees. Gretta thinks about all the 'bad boys', and on the excitement of being in love. She feels weak. This man is so much more exciting then her husband Wim.

This man needs her.

Then nature takes it's course.

Gretta pulls up the blankets hurls herself on Arafat, and has her way with him.

Yasser Arafat is lying on his cot in his ruined compound, somewhere in Ramallah. He hears a siren in the distance . Arafat is awake, but he lies still and keeps his eyes closed.

He's been stuck with that groupie in blue jeans ever since she climbed through the hole in the wall of his study.

He feigns sleep. And now, as if things couldn't get any worse, the self appointed 'human shield' is right next to him.

The cot starts begins to creak. Gretta's head with her coiffed black hair is very close. He smells her distinct perfume. For the first time in his life he is afraid. The witch wants something from him. He shudders at the thought. Good thing he kept his clothes on.

He has to act immediately!

Arafat snorts and turns, pulling up his knees to prepare himself. He pushes against Gretta with all his might.

Israel out of the occupied territory and this creepy woman out of bed ! Her body appears to be responding to his efforts. Arafat pushes again like he never pushed before.

Suddenly the cot creaks and shakes and he feels the blankets being ripped from him.

Oh, Allah, help me, thinks Arafat, while Gretta's thighs hold him in their merciless grip.

This is the most horrific ordeal of my life. This is far worse then any Israeli retaliatory strike.

For more on Duisenberg vs. Koelman see:

Arafat and Hans Koechler of the International Progress Organisation : One picture worth a thousand words.... 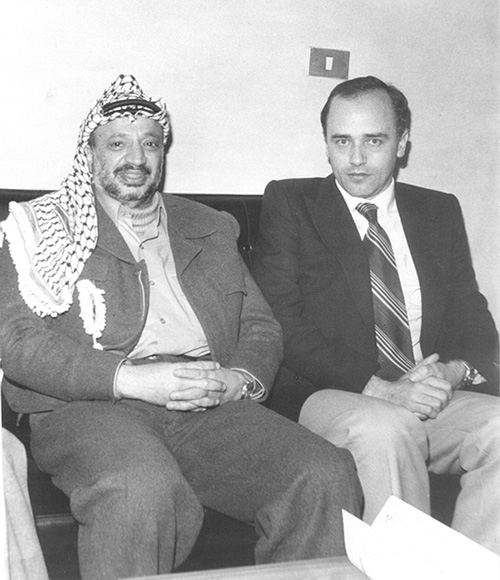 The Chairman of the Palestine Liberation Organization (PLO), Mr. Yasser Arafat, meeting with Dr. Hans Koechler, President of the I.P.O. (right), for consultations on the International Conference on the Question of Palestine and Jerusalem (Beirut, February 1980).