CAIR/ Hamas Cries Victimhood: Warns American Muslims Not To Travel To France Because THEY May Be Attacked 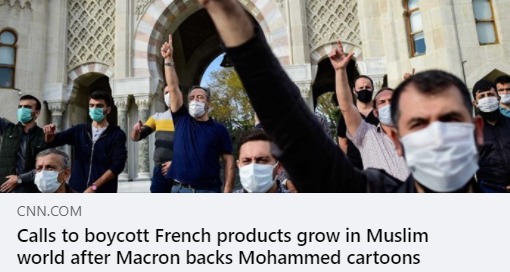 CAIR also cited a racist stabbing attack on two Muslim women in Paris and legal prohibitions on religious attire as examples of the danger and discrimination American Muslims may face in France.

"The French government's irrational, illegal and hypocritical campaign of bigotry against its own citizens must end. France cannot extol the virtues of free speech while punishing French Muslims for engaging in free speech, nor can France claim to be a beacon of freedom while calling on dictatorships to ban their Muslim citizens from boycotting French products.

"Everyone in France should have the right to practice their religion, and everyone around the world has the right to decide which products they purchase. That right includes avoiding those products that provide economic support for a nation engaged in the stereotyping and marginalization of an entire faith community through bigoted political rhetoric and discriminatory policies."

Over the past 20 years, France has implemented numerous laws designed to limit and punish the free exercise of religion, especially among Muslims. France has banned students, teachers, and public servants from wearing visible signs of their faith, including hijabs, at school or at work.

French law also forbids people from wearing religious face veils in public, while simultaneously requiring them to wear medical face masks. Muslim women in some areas of France have also been fined by police for wearing full-body swimsuits.

Earlier this month, President of France Emmanuel Macron delivered a speech about the French Muslim community in which he claimed that 'Islam is a religion that is in crisis all over the world today, we are not just seeing this in our country' and has expressed concern of 'Islamic separatism' and called to 'liberate' Islam.