This item is available on the Militant Islam Monitor website, at http://www.militantislammonitor.org/article/id/7785

MIM: Robert Spencer of Jihad Watch exposes the sham,fraud & inanity behind Shireen "I don't want to be called a Muslim" Qudosi a phony 'Muslim Reformer' who is milking gullible non Muslims for money by peddling 'Fantasy Islam'.

Shireen Qudosi And The Question Of Islamic Reformers 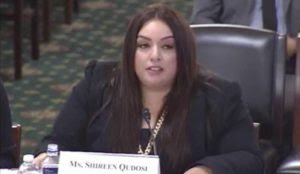 Recently I had an unpleasant online encounter with the self-styled "Muslim Reformer" Shireen Qudosi that highlighted some of the principal problems with the entire Muslim reform movement in the West, and showed why so many people are skeptical of these "reformers." Please pardon the personal references in the first part of this; this post is actually not about me at all, but the personal story is necessary to illustrate some things about Qudosi.

It began when Qudosi responded to a tweet by Mansoor Shams, the "Muslim Marine," including me among a long list people Shams said one should not learn Islam from. Qudosi replied, "Agreed brother." 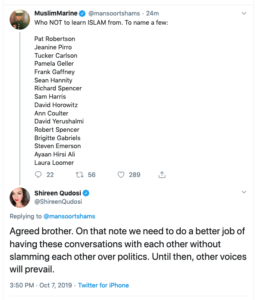 I thought this was odd, since in 2016 I followed Qudosi on Twitter, and she sent me a message saying that my following her was "a bit of an honor." 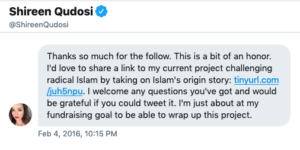 So I asked her about the change, and she replied: "Yes we all know you think I'm a closet Islamist, Robert." This was a false claim, so I asked her to substantiate it. To that she responded: "To jog your memory, years ago you wrote a response to an article I published  in it I'm clumped along with CAIR. Did you specifically say Islamist? No. Is there a distinction for you between your [sic] Islamists and non-Islamists are viewed? Doesn't look like it." The article she was referring to is here. This article says this, contrary to Qudosi's claim that in it she is "clumped along with CAIR": "Qudosi, of course, is not in the same class as CAIR." And of course nowhere does it call her an "Islamist," and in drawing the distinction between her and CAIR (as well as between her and Daisy Khan of Ground Zero Mosque fame), it does exactly what she claims I don't do, draw a distinction between "Islamists and non-Islamists." More importantly, this article is from 2010, six years before she told me that my following her was "a bit of an honor." 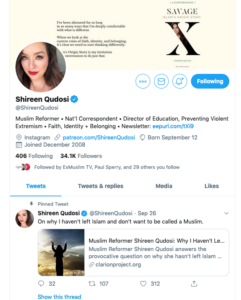 Here is the key point to all this: the same incoherence marks Qudosi's "reformist" writings about Islam. For example, in an article about female genital mutilation (FGM) and Jumana Nugarwala. a Muslim doctor who was prosecuted for the practice, she writes: "there is nothing in Dr. Nagarwala's Islamic faith that condones or justifies this horrific act." Then in the following paragraph, she writes: "The mutilation of little girls has received the protection of faith by critics and proponents of the practice, both of whom often rely on Hadiths' to support their positions on the issue. Hadiths are a collection of theological references curating strictly vetted sayings and teachings of the Prophet Muhammad. However, Hadiths are glorified second-hand accounts of what supposedly did or did not happen more than a millennium ago, and collected many years after the prophet's death. They've been wrongly ossified as a part of the Islamic faith when in fact Hadiths are nothing more than a primitive game of he said, she said.'"

Qudosi disparages the Hadith and says they're "wrongly ossified as a part of the Islamic faith," without ever stating the fact that hers is a decidedly a minority and non-traditional view in Islam, or that Islamic law as codified by all the Sunni and Shia schools of jurisprudence relies on the Hadith and considers statements of Muhammad that are deemed authentic to be normative for Muslim faith and practice. By not mentioning the fact that 99% of Muslim theologians or more accept the Hadith, Qudosi is misleading uninformed non-Muslim readers into complacency: they'll go away assuming that Islamic teaching on FGM is benign except for a few "extremists" who have interpreted it "wrongly," and thus never confront the actual root causes of FGM in Islamic teaching.

This doesn't mean that Shireen Qudosi is a "closet Islamist." It does mean that whatever she is, she is not a genuine reformer.

I'm all for reform in Islam, but you can't fix it unless you admit it's broken. I once knew a genuine Islamic reformer, my good friend the late Tashbih Sayyed, who was a member of the Jihad Watch Board. Rather than falsely claiming that various aspects of Islam that jihadis used to justify violence and oppression were not really part of Islam at all, Sayyed forthrightly acknowledged that they were, and called for them to be reconsidered and rejected. That is what separates real Islamic reformers from fakes: real Islamic reformers admit that there are aspects of Islam that need to be reformed. They don't pretend that the noxious aspects are not really part of Islam at all. They are not either duplicitous or impossibly muddled in their thinking, as is Shireen Qudosi. Fake reformers rely on the ignorance of non-Muslims about Islam, and when they claim that Islamic teaching is not what it demonstrably is, they show that they're not reformers at all. And since they mislead people into thinking the challenge of Islam, jihad, and Sharia is not what it is, they do more harm than good. Conservatives especially are avid to find and support self-proclaimed Islamic reformers, so as to demonstrate that they're not "anti-Muslim" (Leftists, by contrast, don't care about Islamic reformers, as they have no trouble embracing "Palestinian" jihadis and others of their ilk). Fake reformers make out like bandits taking advantage of these people. This is not beneficial to anyone, except the fake reformers themselves.

This item is available on the Militant Islam Monitor website, at http://www.militantislammonitor.org/article/id/7785