This item is available on the Militant Islam Monitor website, at http://www.militantislammonitor.org/article/id/7659

Interfaith As Bad Faith: Christians And Muslims Celebrate The Annunciation 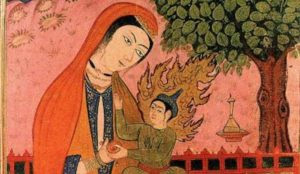 On March 28, 2018, Christians and Muslims gathered at the Al Hussein Cultural Center in Amman, Jordan to celebrate the Annunciation. The driving force behind this was the Catholic Center for Studies and Media (CCSM), also located in Amman.[1]

Prior to the celebration, Fr. Rif'at Bader, Director of CCSM, said:

the message of the first Islamic Christian celebration of the "Feast of the Annunciation" in the Kingdom is to entrench values of brotherhood and to further consolidate Muslim-Christian relations in Jordan and abroadFr. Bader said that the ceremonyindicates that the contents of the Noble Quran and the Holy Bible are congruous with regards to the personality of Virgin Mary.[2]

On the day of the celebration, Fr. Bader addressed those gathered:

Following the birth of Lord Jesus, the archangel told the shepherds, "I bring you good news". Today, on the Feast of Annunciation, Archangel Gabriel tells Virgin Mary, "Hail Mary, full of grace". This is reported in Gospel of Luke and Surat Al-Imran. It is the propitious annunciation which revealed the Advent of Lord Jesus Christ who disseminated the message of love and peaceWe have gathered here today as one family to say that we support the establishment of new and distinguished relations between Muslims and Christians not only in our holy country, but rather throughout the world.[3]

Do the Christian and the Muslim understandings of the Annunciation really have so much in common that Christians and Muslims can celebrate it together "as one family"?

Here is what the Bible says about the Annunciation in Luke 1:26-38:

In the sixth month the angel Gabriel was sent from God to a city of Galilee named Nazareth, to a virgin betrothed to a man whose name was Joseph, of the house of David; and the virgin's name was Mary. And he came to her and said, "Hail, full of grace, the Lord is with you." But she was greatly troubled at the saying, and considered in her mind what sort of greeting this might be. And the angel said to her, "Do not be afraid, Mary, for you have found favor with God. And behold, you will conceive in your womb and bear a son, and you shall call his name Jesus. He will be great, and will be called the Son of the Most High; and the Lord God will give to him the throne of his father David, and he will reign over the house of Jacob forever; and of his kingdom there will be no end."

And Mary said to the angel, "How can this be, since I have no husband?" And the angel said to her, "The Holy Spirit will come upon you, and the power of the Most High will overshadow you; therefore the child to be born will be called holy, the Son of GodFor with God nothing will be impossible." And Mary said, "Behold, I am the handmaid of the Lord; let it be to me according to your word." And the angel departed from her.[4]

This is summarized in the Catechism of the Catholic Church:

The Holy Spirit prepared Mary by his graceIt was quite correct for the angel Gabriel to greet herIn Mary, the Holy Spirit fulfills the plan of the Father's loving goodness. With and through the Holy Spirit, the Virgin conceives and gives birth to the Son of God.[5]

And the website of which Fr. Bader is the Editor-in-Chief, Abouna.org, has this to say about the Annunciation:

The Solemnity of the Annunciation of the Lord celebrates the coming of the Angel Gabriel to the Virgin Mary to announce to her the special mission God had chosen for her in being the mother of His only SonWhen we repeat the words of the angel by praying the Hail Mary, the word of God germinates in our soul. Christianity is this never-ending event of encounter with God made present in the maternity of the Blessed Virgin Mary.[6]

So in the Christian Annunciation, we see that the angel Gabriel came to Mary and announced that she was to bear the Son of God.

Here is how the Muslim Annunciation is presented in the Koran in Chapter 19, Verses 16-21:

And mention in the Book (the Qur'an, O Muhammad, the story of) Maryam (Mary), when she withdrew in seclusion from her family to a place facing east. She placed a screen (to screen herself) from them; then We sent to her Our Ruh [angel Jibrail (Gabriel)], and he appeared before her in the form of a man in all respects. She said: "Verily, I seek refuge with the Most Gracious (Allah) from you, if you do fear Allah." (The angel) said: "I am only a messenger from your Lord, (to announce) to you the gift of a righteous son." She said: "How can I have a son, when no man has touched me, nor am I unchaste?" He said: "So (it will be), your Lord said: That is easy for me (Allah). And (We wish) to appoint him as a sign to mankind and a mercy from Us (Allah), and it is a matter (already) decreed (by Allah).'"[7]

There is a slightly different version in the Koran Chapter mentioned by Fr. Bader, Surat Al-Imran(Chapter 3, Verses 45-47):

(Remember) when the angels said: "O Maryam (Mary)! Verily, Allah gives you the glad tidings of a Word ["Be!"  and he was! i.e. Isa (Jesus) the son of Maryam (Mary)] from Him, his name will be the Messiah Isa (Jesus), the son of Maryam (Mary), held in honour in this world and in the Hereafter, and will be one of those who are near to Allah." "He will speak to the people, in the cradle and in manhood, and he will be one of the righteous." She said: "O my Lord! How shall I have a son when no man has touched me. [sic]" He said: "So (it will be) for Allah creates what He wills. When He has decreed something, He says to it only: "Be!"  and it is.

And, not surprisingly, Muhammad himself referred to Jesus as just another prophet.[8]

These two Annunciation stories share this in common: Mary was approached by an angel named Gabriel who told her she would bear a son sent to her by a Supreme Being.

Thus another Potemkin Village is built for the sake of "Interfaith Dialogue."

Dr. Stephen M. Kirby is the author of five books about Islam. His latest book is The Lure of Fantasy Islam: Exposing the Myths and Myth Makers.

[6] "The Solemnity of the Annunciation of the Lord," Abouna, March 25, 2014; accessible athttp://en.abouna.org/en/content/solemnity-annunciation-lord.

[7] These verses and the subsequent verses are from Interpretation of the Meanings of The Noble Qur'an, trans. Muhammad Muhsin Khan and Muhammad Taqi-ud-Din Al-Hilali (Riyadh, Kingdom of Saudi Arabia: Darussalam, 2007).

This item is available on the Militant Islam Monitor website, at http://www.militantislammonitor.org/article/id/7659