This item is available on the Militant Islam Monitor website, at http://www.militantislammonitor.org/article/id/7614

Oxford Prof Ramadan Was Banned From US - Fired In Holland For Taking Money From Iran
October 30, 2017 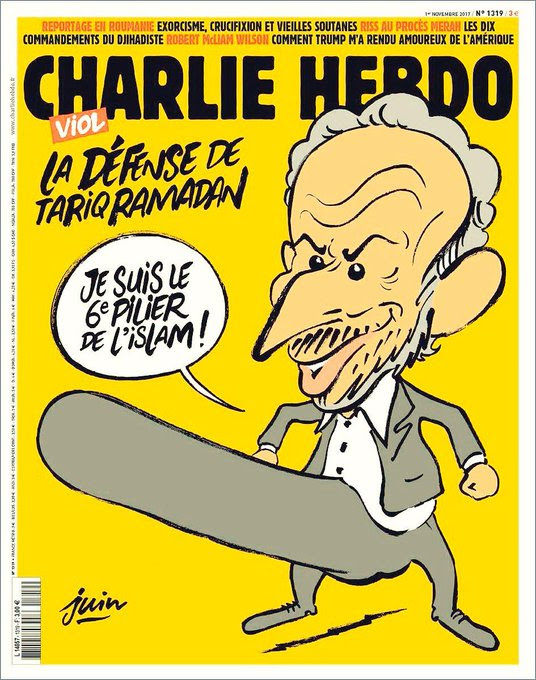 Three women said they were sexually assaulted by Tariq Ramadan, a Swiss Islamist with ties to terrorists who justifies Palestinian Arab terrorism and promotes conspiracy theories on Jews.

His supporters are calling the accusations the result of an "international Zionist plot" to blacken his name.

The third and newest complainant, a woman identified only as Yasmina in the French media, told Le Parisien that Ramadan, a professor of contemporary Islamic studies at Oxford's St. Anthony's College, that he sexually harassed her in 2014 and blackmailed her for sexual favors, the weekly reported Saturday. She said Ramadan threatened to distribute "compromising pictures" of her.

Ramadan has denied any wrongdoing.

The accusations by Yasmina, who said she was filing criminal charges against Ramadan, closely followed the filing of criminal charges against him on Oct. 20 for alleged rape by Henda Ayari, a former Islamist turned secular feminist. The alleged crimes took place in 2012 in France, added Ayari, who also said that Ramadan threatened her and that she was afraid to denounce him "for fear of reprisals."

On Thursday, another complainant against Ramadan stepped forward. A convert to Islam who is suffering from a disability in her legs, she said she suffered "sexual violence of great brutality" by Ramadan in 2009. She also filed a formal complaint against Ramadan.

All the complainants said they had been in contact with Ramadan for spiritual guidance. A lawyer representing Ramadan said he was working on libel suits against the complainants, whose accounts the lawyer said were mendacious.

Following Ayari's decision to step forward, journalist Caroline Fourest, who has reported extensively about Ramadan's controversial career, on Friday wrote in the Marianne weekly that supporters of Ramadan are calling the accusations the result of an "international Zionist plot" to blacken his name.

Ramadan, who in 2009 was fired from Rotterdam's Erasmus University for taking money from the Iranian regime and who has been refused entry to France and the United States over his ties to Hamas and other terrorist groups, has often aired conspiracy theories about Israel and Jews.

In a column titled "The Double Life of Tariq Ramadan," Fourest wrote that she first heard in 2009 of sex crimes by Ramadan, whom many critics have accused of encouraging violence and alleged misogyny when speaking to Muslims, and then denouncing it when speaking to non-Muslims. She could not publish the accounts because none of the victims would step forward, she wrote.

In 2014 he said that the slaying of four people at the Jewish Museum of Belgium, which authorities say was perpetrated by the Islamist Mehdi Nemmouche, was in fact a deliberate attack on Israeli secret agents.

And in a 2004 interview, Ramadan said that violence for the Palestinian Arabs is "a legitimate resistance," and "the only way for them to be heard at the international level." In the same interview, he also said he does not justify the use of violence against Israelis.

MIM: Desperate to appear relevant the 12 member Muslim Reform Movement has gotten into the act and issued a statement in support of Ramadan's accusers.

The Muslim Reform Movement stands in solidarity with the courageous women who are coming forward to testify against an alleged abuse of power by Islamic theologian Tariq Ramadan, a self-described "reformer" in the puritanical Salafi interpretation of Islam and the grandson of the founder of the Muslim Brotherhood, a global movement, advocating for political Islam.

We support the noble efforts of the women to defend their right to human decency and dignity.

We must reverse the idea of honor and shame in our Muslim communities and recognize that shame lies with anyone who abuses power and honor rests with those who stand up for dignity.

The brave women stepping forward to bear witness to alleged injustice are not only courageous because they are speaking truth to power, but because they are also refusing the shroud of shame that too often acts as a cloak for unethical and illegal misconduct.

The women are fulfilling their divinely-ordained commandment to stand up for justice. The Qur'an (4:135) enjoins us to "stand firm for justice...even if it is against your kin."

Mr. Ramadan has allegedly used the cloak of authority in Islam and the ummah, or Muslim community, to engage in improper behavior. It is our duty to testify to the truth of any alleged abuse of power so that justice can be served.

We encourage all women and men to find their voices and come forward if they have any information related to alleged crimes and abuse of power, as part of a new initiative we have launched called, the Bearing Witness Project. Please contact us @theMuslimReform if we can help facilitate, investigate and support.

This item is available on the Militant Islam Monitor website, at http://www.militantislammonitor.org/article/id/7614