This item is available on the Militant Islam Monitor website, at http://www.militantislammonitor.org/article/id/7468 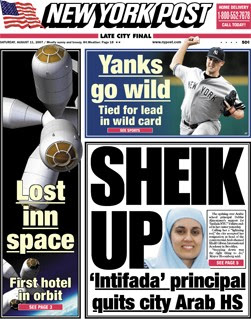 MIM: Dhabah aka Debbie Almontaser is an expert at taqiyya aka lying. In an article in Haaretz about a recent kumbaya event organised by the Shalom Hartman Institute she blamed Jews for her 2007 ouster as principal at the Khalil Gibran International Academy (KGIA) and stated that she had "vowed she would never again work with the Jewish community" falsely claiming to a panel that; " In 2007 I was aggressively attacked by individuals within the Jewish establishment and Jewish organizations stood on the sidelines and allowed it to take place".

In the typical fashion of anti semites i.e. (Die Juden sind Unser Ungluck) Almontaser blames Jews for her 'misfortune'. She than perfidiously claims that no Jews or Jewish organisations defended her and that it was only Jews behind the push to oust her from her position as principal of KGIA. Her vow "never again to work with the Jewish community"reeks of classic anti semitism.

This vow is also a willful denial of the fact that the "Jewish community" was very divided among themselves during the campaign to shut down KGIA. Had any non Muslim remarked that they had "vowed never again to work with the Muslim community " they would be disparaged for painting with a broad brush and be labelled "Islamophobic".

Ironically Almontaser prides herself on her "conflict resolution" abilities which are fully on display here as is her pathological lying (taqiyya).

Speaking to a group of impressionable fifth grade children in Brooklyn's PS 51 Almontaser stated, "I don't recognize the people who committed the attacks as either Arabs or Muslims." [source http://www.jrn.columbia.edu/studentwork/cns/2002-06-10/584.asp]

Why do you think terrorists attacked the USA?

"A year ago I could not answer such a question. To me it was just impossible to comprehend how someone could do such terrible, totally sick atrocities. Many said they were not surprised that terrorists attacked the US. That hurt me deeply. Today I believe that the terrorist attacks can have been triggered by the way the USA breaks its promises with countries across the world, especially in the Middle East and the fact that it has not been a fair mediator with its foreign policy. It is not true that the people in the Middle East and Southeast Asia hate our lifestyle, our freedom and our democracy. What disturbs them is that we in order to secure our own well being, deprive them of the possibility of achieving the same high living standard and freedom of choice that we have in the western world. Terror is the last resource of a desperate and oppressed people, but that does not mean that it is acceptable. People who do terrorist acts have lost the sense of right and wrong, each individual committing such acts should be punished with the maximum extent of the law. Only Allah is entitled to take lives. http://www.militantislammonitor.org/article/id/2831

May 8, 2007 update: In an editorial, "Brooklyn Arabic School," the New York Sun reveals another tidbit about Almontaser: "When one of our reporters asked Ms. Almontaser whether she considers Hamas and Hezbollah to be terrorist organizations and who she thinks was behind the terrorist attacks of September 11, 2001, she declined to answer, suggesting she shouldn't be singled out for such questions."

MIM: During the campaign to close down the Khalil Gibran International Academy madrassah she was in fact given massive support by prominent Jewish officials like borough president Marty Markowitz and organizations and individuals including the ADL who wrote a letter on her behalf. (Even her lawyer was Jewish). (see below).

Debbie Almontaser said that she got a feeling of closure by speaking at the Hartman conference. Nearly a decade ago, after she was forced out of her job as the founding principal of the Khalil Gibran International Academy, a dual-language Arabic-English language school in Brooklyn, she vowed that she would never again work with the Jewish community. She lost the job as the result of a successful campaign by some right-wingers, including prominent Jews, who warned that an Arabic-English school would be "a NYC madrassa"  or Islamist seminary.

"In 2007 I was aggressively attacked by individuals within the Jewish establishment and Jewish organizations stood on the sidelines and allowed it to take place," Almontaser said during a panel discussion in which she participated with JCPA's Bernstein, entitled "Communal Politics, Identity Politics and the Interfaith Agenda."..."

"...After the conference, Almontaser told Haaretz that, "it felt really good to be in a room with a large number of American Jews and Muslims from across the country and be able to be brutally honest [and] say that if you want us to work together, these kinds of things have to be addressed. We have to figure out a way not to throw each other under the bus."

"It behooves us to think we can make a difference" in the Israel-Palestine conflict, she said, adding, "It has been governments trying to push" the sides toward peace, but, "It's different when it's organizations and individuals from both sides. When they see American Muslims and American Jews pushing them it's a dynamic that's never happened [before]."

The recent controversy over the Khalil Gibran International Academy in Brooklyn, set up to teach Arabic language and culture in addition to the usual courses, has unleashed unfounded attacks against the NYC Department of Education's new high school, accusing it of being a madrassa and a haven for Islamic extremism ("A Madrassa Grows in Brooklyn," April 24 and "Madrassa Plan Is Monstrosity," May 1).

These attacks have also been personally directed at KGIA's principal, Debbie Almontaser. The Anti-Defamation League has a long history of working with Ms. Almontaser through our anti-bias workshops.

Through joint coalition work in Brooklyn against hate crimes, she has demonstrated her support for the civil liberties of all people. She is deeply committed to creating an inclusive learning environment that embraces the unparalleled diversity in New York City.

To help support this goal, we are in discussion with Ms. Almontaser about implementing our A WORLD OF DIFFERENCE® Institute anti-bias training in KGIA.

The Khalil Gibran International Academy is just one of several in the New York City school system devoted to teaching a specific language and culture; the others include Russian, French, Spanish, and Japanese.

These schools are open to all students and those who choose to attend can be enriched by the added dimension.

"KGIA was Ms. Almontaser's vision and she was unarguably the right person to lead it," said Rabbi Michael Feinberg, quoting a statement from Jewish leaders to Mayor Bloomberg and Chancellor Klein. "That she is not principal today is solely the result of attacks upon her by marginal, right- wing groups, who charged her and KGIA with hostility to Israel and Jews. We state emphatically that those groups do not represent the views of the mainstream Jewish community in New York City." http://www.militantislammonitor.org/article/id/3215

After 9/11, Education Department officials had enlisted Ms. Almontaser to hold workshops on cultural sensitivity for schoolchildren. She spread the message that Islam was a peaceful religion...She was soon attending interfaith seminars, befriending rabbis and priests. Mayor Michael R. Bloomberg honored her publicly. She became a ready commentator for the media, prompting some Muslims to joke that she was the city's "talking hijabi."http://www.nytimes.com/2008/04/28/nyregion/28school.html

This item is available on the Militant Islam Monitor website, at http://www.militantislammonitor.org/article/id/7468