This item is available on the Militant Islam Monitor website, at http://www.militantislammonitor.org/article/id/5414

Abu Hamza to be extradited to US 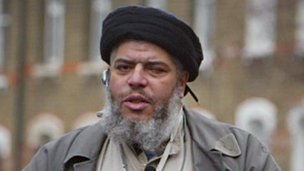 Five suspected terrorists including Abu Hamza al-Masri can be extradited to the US, ending a long legal battle, UK High Court judges have decided.

Their appeal came after the European Court of Human Rights backed successive UK courts in ruling for extradition.

A Home Office spokesman welcomed the decision and said it was "working to extradite these men as quickly as possible".

The BBC understands two US civilian jets - one of which is registered to the US Department of Justice - are on the tarmac at an air base in eastern England.

Judges Sir John Thomas and Mr Justice Ousley said in their ruling that there was an "overwhelming public interest in the functioning of the extradition system" and that there was "no appeal from our decision".

Of the long legal battle to send the men - whose extradition requests were submitted between 1998 and 2006 - to the US, Sir John told the court: "It is unacceptable that extradition proceedings should take more than a relatively short time, to be measured in months not years.

"It is not just to anyone that proceedings such as these should last between 14 and eight years."

There was no doubt each man had, over the years, "either taken or had the opportunity to take every conceivable point to prevent his extradition to the United States", he added.

The comments echoed those of James Eadie QC - representing the home secretary - who, during this week's hearing, argued the men's applications amounted to an abuse of process.

The judges' written ruling, read out in court, concluded that "each of the claimants' applications for permission to apply for judicial review or for a re-opening of the statutory appeals be dismissed".

Abu Hamza's final appeal against extradition ended in judicial fireworks in the High Court - although the judges expressed their anger in completely different terms to those used by Abu Hamza when he preached in London.

Barring an utterly unforeseen legal twist - and this case has had its fair share - the next time we'll see Abu Hamza will be in Federal Court in New York.

The battle has seen prime ministers and US presidents come and go. Six home secretaries had his file in the ministerial red box.

But put aside the courts and the politics for one moment and remember his real impact.

And he cast a long shadow over the lives of British Muslims who wanted to get on with life - just like the Christians and Jews Abu Hamza hated.

The judges rejected a plea by Abu Hamza to delay his extradition so he could undergo an MRI brain scan which, his lawyers said, could show he was unfit to plead because of degenerative problems.

"The sooner he is put on trial the better," they said.

The 54-year-old, a former imam at Finsbury Park mosque, north London, was suffering from chronic sleep deprivation and depression as a result of eight years in prison, his lawyers added.

But during the hearing, Sir John observed there were "excellent medical facilities in the United States".

The BBC's Dominic Casciani, at the High Court, said the British government had got the result it had wanted to see for years on Abu Hamza, who the US first attempted to extradite in 2004.

His extradition was halted when the UK decided to try him on allegations relating to his sermons. He was convicted in 2006.

The judges also rejected appeals from Mr al-Fawwaz and Mr Bary, who are accused of being aides to Osama Bin Laden in London.

The US alleges they promoted violent jihad against the West and were involved in the 1998 US embassy bombings in East Africa, which killed more than 200 people. 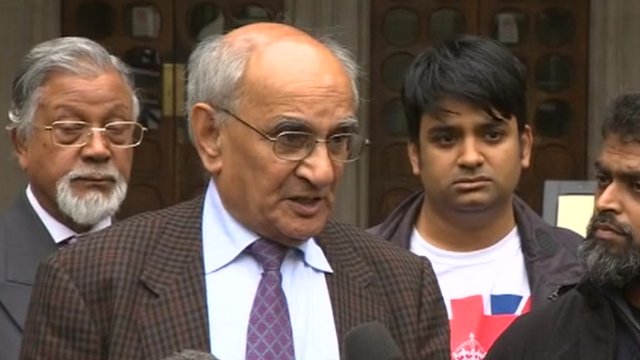 The battle to stay in the UK is also over for Babar Ahmad and Talha Ahsan, who are accused of running pro-jihad website Azzam.com - which the US says was hosted there - and of helping terrorists.

In a statement prepared in prison before the verdict, Mr Ahmad said that, "By exposing the fallacy of the UK's extradition arrangements with the US, I leave with my head held high having won the moral victory."

Mr Ahmad's father, Ashfaq, said outside court he was appalled the British legal system had let him down "in a manner more befitting of a Third World country than one of the world's oldest democracies".

"We will never abandon our struggle for justice for Babar and the truth will eventually emerge of what will be forever remembered as a shameful chapter in the history of Britain," he added.

The law enforcement relationship between the United States and United Kingdom is predicated on trust, respect, and the common goals of protecting our nations and eliminating safe havens for criminals, including terrorists"

And Emma Norton, legal officer for human rights group Liberty, said that, as Mr Ahmad's alleged offences took place in the UK, "It beggars belief that he won't be tried here."

"Isn't British justice - so admired around the world - capable of dealing with crimes committed in the UK by its own citizens?" she added.

In a statement released by its embassy in London, the US said it was "pleased" the men were being extradited after "a lengthy process of litigation".

"The law enforcement relationship between the United States and United Kingdom is predicated on trust, respect, and the common goals of protecting our nations and eliminating safe havens for criminals, including terrorists," it added.

Lord Reid, who was home secretary in 2006 and 2007, meanwhile, said that like "the vast majority of people in this country" he had a sense of satisfaction "that justice, or at least this sense of the judicial process" had been complete.

He told BBC News "The propriety, the attention, the compassion, the legal approach that has been taken on this by the British stands in marked contrast to what was meted out to the victims of some of these alleged crimes."

But he urged the home secretary to look at the length of time the legal process took "because there is no doubt there has been a degree of frustration".

BBC legal correspondent Clive Coleman said the judges had thrown down the gauntlet for Parliament to look at judicial reviews - which can be used to re-open issues that have already been decided.

One of the challenges was to stop suspects from storing up last-minute legal challenges that frustrate the courts and bewilder the public, he added.

This item is available on the Militant Islam Monitor website, at http://www.militantislammonitor.org/article/id/5414