This item is available on the Militant Islam Monitor website, at http://www.militantislammonitor.org/article/id/5316

An explosion on a bus transporting Israeli tourists at the airport near the city of Burgas in Bulgaria has reportedly left seven dead, most or all of whom are Israelis. Bulgarian television said that the dead apparently include a Bulgarian tour guide.

Other reports say there are three or five dead.

The destination is popular among Israeli youths and the casualties are reportedly mostly youths.

The Foreign Ministry has announced that it is sending personnel to the site.

Voice of Israel Radio said that 25 people are wounded. It said that a suicide bomber boarded the bus before the explosion occurred, but other reports said the explosion came from the bus's luggage hold.

The plane whose passengers were attacked reportedly landed in Burgas at 4:45 p.m. local time. The flight was chartered for tour company Kavei Hufsha and there were reportedly 165 passengers on the flight.

Israel's Ambassador in Bulgaria is on his way to the Burgas Airport.

According to one report the explosion occurred on a bus carrying Israeli tourists in the terminal "Srfovo." Other reports say the explosion caused at least one other bus to catch fire.

According to another report, shots were fired at the Israelis.

Shoshi, an eyewitness, told Voice of Israel Radio "We went through passport control and representatives were waiting to deposit us in buses to the hotels. We put the bags in the trunk, and after a few minutes, the bus exploded in flames. Then we returned to the terminal, and now we are trying to determine who is missing and who is dead."

Shoshi's son added: "People who survived the explosion escaped from the window, and could not step over the bodies. The bus was shattered on both its sides."

Burgas is a popular tourist town on the Black Sea to which many Israelis flock each week.

Bulgarian Police: This was a Terrorist Attack

Bulgarian police have declared the bombing at the Sarafovo Airport in Burgas, Bulgaria to be a terrorist attack, according to the Sofia News Agency. Reports now say that 7 Israeli citizens have been murdered and approximately 18 people injured. 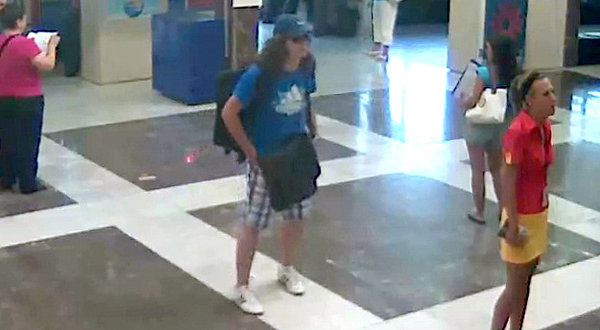 This photo released by the Bulgarian Interior Ministry shows a man with long hair wearing a backpack that the ministry says is the bomber of a tour bus carrying Israeli citizens.

This item is available on the Militant Islam Monitor website, at http://www.militantislammonitor.org/article/id/5316