This item is available on the Militant Islam Monitor website, at http://www.militantislammonitor.org/article/id/517

It takes one to know one: Ghadafi : "Terror is identified with Islam"

MIM: Translation: Despite of protests by International Human rights groups and the USA, Libya will take over the chairmanship of the UN Human Rights Commission for one year...One problem: Libya is a dictatorship.

In 2003 , a Ghadafi funded plot to assassinate Prince Abdullah of Saudi Arabia was foiled when Abdulrahman Alamoudi, head of the America Muslim Council was arrested, found with a suitcase of money from Libya, and charged with having been commissioned to hire a hit man to 'waste' the prince .This, and other terrorism related charges, got Alamoudi a 23 year jail sentence. http://www.militantislammonitor.org/article/id/306

Last year Ghadafi 'destroyed' his nuclear arsenal as a condition to having economic sanctions lifted. The Lockerbie bombing which killed 270 people which he had ordered was forgiven. The bomber was treated as a VIP while in a Scottish prison, where he received visits from fellow human rights campaigners, UN secretary Kofi Annan and Nelson Mandela. http://littlegreenfootballs.com/weblog/?entry=8959_Lockerbie_Bomber_Living_in_Luxury

MIM:The terrorist leader was consequently given a hero's welcome by the EU in Brussels last year. A tent was set up in front of the Val de Duchesse where he could receive his dhimmi visitors. 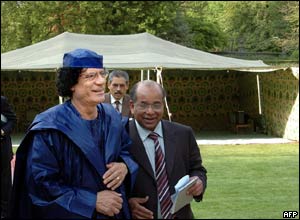 "...Talks between Chirac and Libyan leader Muammar Ghaddafi also tackled issues of mutual concern and economic cooperation...He added that the Libya's declaration to give up weapons of mass destruction contributed a lot to their new friendship... http://www.qingdaonews.com/gb/content/2004-11/25/content_3947320.htm

By Reuters and Haaretz Service

The Palestinian Authority on Thursday demanded an apology from Libyan leader Muammar Gadhafi for saying Palestinians were "idiots" in seeking their own state alongside Israel.

Gadhafi made the remarks during a fiery speech at an Arab summit on Wednesday that ended by relaunching an offer to Israel of normal relations if it withdrew from all occupied Arab land and permitted a Palestinian state.

Gadhafi also asked why Palestinians hadn't established a state between 1948 and 1967, when the West Bank was under Jordanian sovereignty and Gaza under Egyptian control.

Gadhafi shocked the Arab leaders by saying, "Terror is identified with Islam." He dismissed the argument that poverty is at the root of violence by Islamists, and put the blame on "oppression, injustice, arrogance, insults, contempt and the humiliation of this [Arab] nation."

A Palestinian official called on Gadhafi to keep his theories to himself.

"[We] have asked President Gadhafi to apologize to the Palestinian people for words ... that offended the feelings of all Palestinians, Arabs and Muslims," Tayeb Abdel Rahim, secretary general of the Fatah Central Committee, said in a statement.

"These remarks should not have been made by an Arab president at a summit conference and also contradicted the summit's resolutions," he said.

"We will not respond in the same way because we respect the brotherly Libyan people and we appreciate their traditional supportive position for the Palestinian people."

Abdel Rahim called on Gadhafi to stop "exporting his theories to us. The Palestinian people have enough headaches and do not have enough aspirin."

Abbas did not seem too fussed by Gadhafi's speech, chuckling at parts of it.

Gadhafi also said Israelis were idiots because they declared a state but
never showed any real interest in the West Bank and Gaza Strip.

Asked about the "idiot" reference, Foreign Ministry spokesman Mark Regev said: "It takes one to know one."

This item is available on the Militant Islam Monitor website, at http://www.militantislammonitor.org/article/id/517