This item is available on the Militant Islam Monitor website, at http://www.militantislammonitor.org/article/id/2805

Americans Against Hate protest against Congressman Joe Sestak and CAIR

Friends, I have traveled up from Florida to stand here with you, today, for this important event, at a very important location. Philadelphia is not just important to this nation's history, but it is, as well, an important location in the history of CAIR, for it was in Philadelphia that future leaders of CAIR, in 1993, congregated to discuss ways in which they could finance Hamas from America.

It is significant to note that one of those leaders, Ghassan Elashi, recently received a seven year prison sentence for raising millions of dollars for Hamas.

CAIR or the Council on American-Islamic Relations was created by three executives of the Islamic Association for Palestine, a group that published the Hamas charter in a number of languages, a group that created Hamas training videos, and a group that was shut down in 2005 after it was found liable for the murder of an American boy during a Hamas attack in Israel. The founder of this group  essentially CAIR's grandfather  is none other than Mousa Abu Marzook, the number two leader in Hamas today.

CAIR, since it began, in June of 2004, has done little to differentiate itself from its parent organization. As recently as February of this year, the Philadelphia chapter of CAIR  the chapter that is holding its annual banquet here tonight  instructed its followers to write letters to officials from the United States government in support of convicted terrorist Sami Al-Arian. If you don't already know, Al-Arian was a founder of Palestinian Islamic Jihad and the North American leader of the group. He played a significant role in the murders of over 100 innocent human beings, including two Americans.

It is with this in mind  and so much more  that makes it so unsettling to find out that some of those in our government continue to seek to legitimize this group by participating in their events. One of those officials is speaking here tonight, Congressman Joe Sestak.

Joe Sestak is no stranger to CAIR. While he was running for office, a CAIR staffer named Taimur Mian, helped organize and was a part of "get out the vote" drives for Congressman Sestak. He even had at least one fundraiser held for him, hosted by the Chairman of CAIR-Philadelphia, Iftikhar Hussein. And when Congressman Sestak did get into office, he didn't waste much time in hiring CAIR-Philadelphia's Office Manager and Communications Director, Adeeba Al-Zaman, about whom he says he "cannot speak highly enough about her."

Congressman Sestak has worked hard to make inroads with America's enemies, and we're here to tell him that it is unacceptable. Congressman Sestak, for you to be speaking here, tonight, at a CAIR event  a CAIR event that is also featuring the National Chairman of CAIR, Parvez Ahmed  is offensive and a disgrace to the office which you hold! We call on you to apologize to your constituents and absolve yourself of all your ties to CAIR, including your ties to your present CAIR staffer.

The Congressman says that he will only be speaking at the banquet part of CAIR's event and not at its fundraiser. CAIR-Philadelphia even changed the flyers announcing their event, on its website, to account for Sestak's statement, proving that the degrees of separation between the Congressman's office and the CAIR office are few and far between. No matter what spin Congressman Sestak wants to put on his actions tonight, we want to make it clear to everyone, the CAIR banquet and the CAIR fundraiser are one and the same! CAIR is CAIR! There is no difference! Congressman Sestak, come clean. Admit your wrongdoing, and cut your loyalties to CAIR!

There are others that have done similar. In December of 2006, after understanding that she made a mistake, Senator Barbara Boxer rescinded an award from the Executive Director of CAIR-Sacramento, Basim Elkarra, that her office had given him. Senator Boxer saw that it was an error in judgment to give an award to someone from CAIR, and she rectified it, and for that we are proud of her. Congressman Sestak, make the people that placed their trust in you and voted for you proud. Renounce your ties to CAIR now! Instead of speaking at their events, instead of allowing their leaders to hold fundraisers for you, instead of hiring their operatives for your staff, do as we are doing and work to SHUT THEM DOWN!

The new member of the U.S. House spoke to a Muslim group. He offered praise as well as some admonishment. 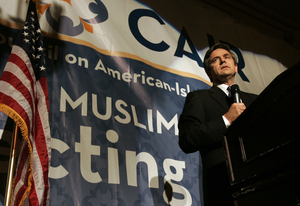 LAURENCE KESTERSON / Inquirer Staff Photographer U.S. Rep. Joe Sestak (D., Pa.) speaks to the local chapter of the Council on American-Islamic Relations. "It is perilous not to speak, even to others who you may not agree with," he said in an earlier interview. Inside the posh Hilton Philadelphia last night, a dinner crowd of several hundred Muslims was full of praise for the political courage it said U.S. Rep. Joe Sestak had shown merely by showing up to speak. Outside the City Avenue hotel, amid Passover week snow flurries, about a dozen Jewish protesters held up signs blasting Sestak for what they said was his nerve in showing up. One sign read, "Say it ain't so, Joe." Sestak, a Democrat from Philadelphia's western suburbs, was facing the first real test of his first term in office - how to navigate the conflicting passions that had sprung up with his acceptance of an invitation to address the Philadelphia chapter of the Council on American-Islamic Relations. The group, known as CAIR, is one of the largest Muslim organizations in the country, and its banquet drew a sold-out crowd of about 500. Small but vocal Jewish groups have accused CAIR of being an apologist for terrorism at best, a front for terrorism at worst. "I think it's a disgrace for an American congressman to come to an organization that has so many ties to terrorists," said one of the protesters, Rabbi Lisa Malik of Suburban Jewish Community Center, a Havertown synagogue. CAIR is not on any U.S. list of terrorism sponsors. Since its founding in 1994, it has had good relationships with the U.S. government. It has worked with the FBI in training agents in cultural sensitivity. Gov. Rendell, though not a scheduled speaker, showed up late at the event last night. CAIR, which promotes civil rights for Muslims, has consistently denounced acts of terrorism. But it has refused to condemn the Palestinian group Hamas and the Lebanese group Hezbollah, which the United States does recognize as terrorist organizations. That, more than anything else, has raised its critics' ire. "We try to avoid condemning individuals, organizations or countries, because that prevents the ability for us to create opportunity for bridge-building," said Iftekhar Hussain, chairman of CAIR's Philadelphia chapter, in an interview Friday. Parvez Ahmed, the group's national chairman, told the dinner crowd that Sestak was being "demonized and vilified by the right-wing media and pro-Israel extremists" for agreeing to speak. He said Sestak should be applauded for "standing up to these folks." Sestak, who has said his Seventh District includes at least 20,000 Jewish voters, delivered a 20-minute speech in which he started with praise for peaceful tenets of Islam and the advances of American Muslims. Near the end of the speech, amid clanking silverware and the burble of table conversations, the former Navy admiral said it was not sufficient for any group just to condemn terrorist acts. He said it was CAIR's duty to condemn individuals or groups that commit terrorism, and he specifically mentioned Hamas and Hezbollah. "It's the same as those who did not speak out against the perpetrators of Jim Crow laws . . . or the Holocaust," he said. The remark drew no reaction from the audience. At the end of his speech, he was applauded. Sestak, in an interview Friday, said he had agreed to attend because he had been told that 250 of his constituents would be at the event. "I honestly believe it is the right thing to do," he said in the interview. "It is perilous not to speak, even to others who you may not agree with." The controversy over his speech sprouted March 11 when he addressed a community forum at the Suburban Jewish Community Center. The event was cosponsored by the Jewish Federation of Greater Philadelphia. Sestak was hit with a barrage of criticism from the synagogue audience, which had learned of his plans to speak to CAIR. Sestak's critics pointed out that one of his aides, Adeeba Al-Zaman, is the former communications director for the CAIR chapter in Philadelphia. She had helped him organize support in the Muslim community when he ran for election last year. She had then joined his congressional staff. Sestak said Al-Zaman, without checking with him, had accepted the speaking invitation. "Lots of people wanted me to fire her," he said. But he did not. While declining to say Al-Zaman had made a mistake, he said in the interview that he wished that she had talked to him first. He said he wouldn't have accepted the invitation if he had known that the $50-per-person banquet was partly to raise money for CAIR. He said he told CAIR that he would still attend, but only if it separated the fund-raising portion of the program from the portion at which he would speak. He said CAIR had done that. Midway through the banquet, after Sestak's speech, CAIR officials abruptly announced that the fund-raising portion of the evening would begin. Lori Lowenthal Marcus, president of the Philadelphia-area chapter of the Zionist Organization of America, said separating the program was just a fig leaf to cover up Sestak's help for CAIR in raising money. "After they received heat, they changed it to look as if if were two different events," Marcus, a lawyer, said in an interview Friday. "It's at the same place, one right after another, which is ridiculous." She said Sestak had "a right to speak to anyone he wants," but she added: "You don't go to a fund-raiser for a group that has a connection to terrorism."

This item is available on the Militant Islam Monitor website, at http://www.militantislammonitor.org/article/id/2805