This item is available on the Militant Islam Monitor website, at http://www.militantislammonitor.org/article/id/2064 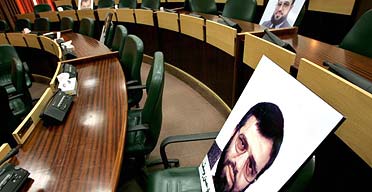 
Israeli forces today arrested more than 60 Hamas politicians in the West Bank and bombed targets in the Gaza Strip.

The moves were designed to increase pressure on Palestinian militants to release an Israeli soldier held captive since Sunday.

There were no casualties in the Israeli attacks, but a confrontation between the army and Palestinian factions became more likely as Israeli forces prepared to enter areas of northern Gaza.

The Palestinian negotiator Saeb Erekat said the arrest of the Hamas politicians, who Israel said included the deputy prime minister, Nasser Shaer, had left the Palestinians without a government.

"We have no government, we have nothing," he said. "They have all been taken. This is absolutely unacceptable, and we demand their release immediately."

The electricity supply to half of Gaza has been cut, and all supplies of fuel and food have been halted.

In Moscow, the foreign ministers of the G8 industrialised nations today issued a joint statement calling on Israel to exercise restraint.

The Russian foreign minister, Sergey Lavrov, said the group was united in wanting both "parties to take all the necessary steps to calm the situation".

Palestinian fighters have prepared bombs and barricades in anticipation of the Israeli army's advance into populated areas.

The Popular Resistance Committees (PRC), one of the militant groups who abducted Corp Shalit, taunted Israel with a statement vowing not to provide information on whether he was dead or alive.

His captors want to exchange him for Palestinian prisoners, but Israel insists it will not negotiate for the freedom of the 19-year-old.

After a separate kidnapping, soldiers today discovered the body of 18-year-old Eliyahu Asheri in a shallow grave near Ramallah. He was abducted as he hitchhiked through the West Bank on Sunday.

The PRC had said he would be killed if Israel did not halt its invasion of Gaza. The Israeli army said he was probably killed soon after his abduction.

A Hamas official said the group was not prepared to discuss the exchange of the 64 West Bank politicians for Corp Shalit.

"He's an Israeli soldier, a prisoner of war, taken in a battle, and falls under a legal category," Osama Hamdan told the Associated Press. "What happened yesterday were hostage-takings and acts of terrorism."

"We came to understand there is no other way to treat them," she said. "They regularly plan and carry out acts of terror against Israel, so we decided to arrest these high-ranking terrorists."

The arrests make it very difficult for Hamas to participate in government in the West Bank. It won the January elections, forming a government that has been plagued by internal opposition and an international boycott.

In Gaza, there was an uneasy calm as Israeli aircraft and forces operated without harming anyone.

Missiles were fired at buildings, roads and open fields, but ground forces made no attempt to enter built-up areas. The navy patrolled the coast and banned fishing boats from putting out to sea.

Leaflets were dropped in northern Gaza, warning residents that Israeli forces planned to enter the area.

An army spokeswoman said all military activity was designed to make it difficult to move the kidnapped soldier and to prevent the firing of Qassam rockets at Israel.

She said the leaflets were dropped to advise Gaza residents to be careful when the Israeli army moved in. "We don't want any innocent civilians to be hurt," she said.

The capture of Corp Shalit, which involved Palestinian militants tunnelling into Israeli territory and engaging in a fierce gun battle which left two dead on either side, has brought Israelis and Palestinians closer to war than at any time in over a year.

Timeline
A chronology of events in the Middle East

Interactive guide
How the Israelis and Palestinians came to war

Weblog
The best journalism on the conflict, from around the web

This item is available on the Militant Islam Monitor website, at http://www.militantislammonitor.org/article/id/2064