This item is available on the Militant Islam Monitor website, at http://www.militantislammonitor.org/article/id/7939

Hijrah vs Homeland Security As Over 30,000 Unvetted Afghan Muslims Are Housed In Army Bases
August 31, 2021

Bringing in Afghan Refugees with All of Their 'Luggage' 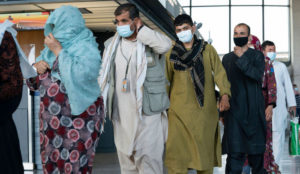 Afghanistan has fallen to the Taliban and American forces are withdrawing. As with such ventures, this has resulted in tens, if not hundreds of thousands of Afghan refugees fleeing their own country. And as night follows day, this has also resulted in calls by many American individuals and organizations to bring in as many of those refugees as possible, because we "owe" it to the Afghans.

To hear such claims, one would think that these many thousands of refugees will immediately become part of America, sharing our values and ideas, and contributing to our communities.

What is not being talked about are the values, ideas, and culture those refugees are bringing with them.

In order to better understand the people many are calling to be brought in by the tens of thousands, let's look at some considerations about the society from which these refugees are coming.

There are two national security issues that must be acknowledged.

Combining these two issues means we could be bringing in a potentially significant base of support for a jihadist group; and that base of support could include a large number willing to engage in jihadist attacks in the United States using explosives.

Then there is Afghanistan's violent history. What is the impact of this history on many of those refugees we are bringing in? Consider this 2018 article:

…Afghanistan is home to nearly two generations that have grown up knowing only conflict and war. As a result, violent and aggressive behavior—particularly from young men—has become an accepted norm of Afghan society…a significant number of Afghan youth have become involved in organized crime or other illegal—and often violent—activities to fulfill their perceived obligations and duties to family…In many parts of Afghanistan, displays of aggression and intimidation represent a rite of passage for adolescent boys and a symbol of manhood for men. The social acceptance of such behavior, however, heightens the risk that intolerance of diversity and interpersonal violence, including violence against women and children, become an everyday fact of life. A 2009 report…described violence as "an everyday occurrence in the lives of a huge proportion of Afghan women."…a majority of Afghans are exposed to violence beginning at an early age, including physical abuse at home by parents and relatives as well as the liberal use of corporal punishment at mosques, madrassas, and schools. Children witness their mothers and sisters being violently abused at the hands of family members, which comes to be accepted as a social and cultural norm, resulting in the acceptance of violence as a first—and sometimes only—option for resolving conflicts.[4]

We are importing from a culture of violence.

What is the attitude many of these refugees have toward women? Here are two assessments:

Women and girls in Afghanistan continue to face widespread discrimination and human rights abuses. The country ranks among the least favourable on the Gender Inequality Index and the literacy rate for women is among the lowest in the world. Violence against women and girls is rife and the majority don't go to school.[5]

About two-thirds of men thought women in Afghanistan had too many rights and that women were too emotional to become leaders, compared to less than a third of women. And while nearly three quarters of women said a married woman should have equal rights with their partner to work outside the home, only 15 percent of men agreed. More than half of men also agreed with the statement that "more rights for women mean that men lose out".[6]

Wife-beating is largely acceptable in Afghanistan:

94% of Afghans completely or mostly agree that a wife must always obey her husband,[8] and two-thirds of Afghan men agree or strongly agree with the statement, "Women in Afghanistan have too many rights."[9]

Considering the information in this and the previous section, it is not surprising to hear this warning from Pierre-Marie Seve, the director and spokesman of the French think tank Institute for Justice. He noted

that migrants are over-represented in nearly all categories of crime [in France] and stated that Afghans, in particular, commit more crimes than asylum seekers from other countries.[10]

Despite a law setting the legal minimum age for marriage at 16 (15 with the consent of a parent or guardian and the court) for girls and 18 for boys, international and local observers continued to report widespread early marriage… By law a marriage contract requires verification that the bride is 16 years of age, but only a small fraction of the population had birth certificates…some girls as young as six or seven were promised in marriage, with the understanding the actual marriage would be delayed until the child reached puberty. Reports indicated, however, that this delay was rarely observed and young girls were sexually violated by the groom or by older men in the family, particularly if the groom was also a child.

Will instances of prepubescent marriage soon be coming to your community or to a community nearby?

Sharia as the official Law of the Land

81% of the Afghans who support Sharia as the official law of the land favor corporal punishments for theft; 85% favor stoning as the punishment for adultery, and 79% favor the death penalty for apostasy.[15]

In terms of honor killings for pre- or extra-marital sex, 60% of Afghans believed honor killings of women were often or sometimes justified; 59% believed the same about killing men in those circumstances.[16]

These are majority views among Afghans that are incompatible with American values and laws.

The Afghan values and beliefs mentioned above are major hurdles to the idea of Afghans integrating as a group into American society. In addition, only 5% of Afghans speak English,[17] and the adult literacy rate is only about 43% (although the numbers vary). 66% of Afghans believe Western popular culture harms morality in their country,[18] and 96% believe that trying to convert others to Islam is a religious duty.[19]

These are not harbingers of widespread social/cultural integration by these refugees into American society.

Those on the side of bringing tens of thousands of Afghan refugees into the United States have been able to rely on noble sounding rhetoric and emotional arguments to confront those who are not as enthusiastic about that venture.

However, the facts presented in this article show that in reality these refugees are coming from a culture and a land whose values and history are completely different from, and largely incompatible with, those of the United States.

What is being generally overlooked is that there are more socially/culturally compatible countries for these refugees that actually border Afghanistan. Perhaps what we might "owe" these refugees is assistance in finding refuge in those neighboring countries.

Dr. Stephen M. Kirby is the author of six books about Islam. His latest book is Islamic Doctrine versus the U.S. Constitution: The Dilemma for Muslim Public Officials.

[3] For why it is not accurate to use the term "suicide bomber" in these circumstances, see my article "Suicide or Paradise?" Arutz Sheva 7 – Israel National News, June 7, 2017, https://www.israelnationalnews.com/Articles/Article.aspx/20604.

This item is available on the Militant Islam Monitor website, at http://www.militantislammonitor.org/article/id/7939