This item is available on the Militant Islam Monitor website, at http://www.militantislammonitor.org/article/id/7615 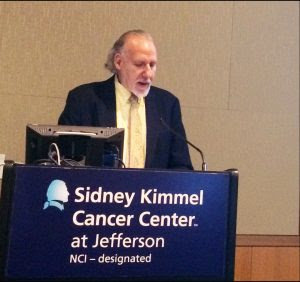 "As you heard in the introduction, I am the first non-Muslim to head one of CAIR's 30 chapters around the US, and the first Jew to direct a Muslim institution since Dr. Maimonides ran the Royal Medical Department in Cairo for the Muslim rulers of Egypt in the 12th Century."

It is a great honor for me to speak to you this morning at this crucially important symposium. I would like to thank the Delaware Health Sciences Alliance and the other organizers of this event for extending an invitation to the Philadelphia Chapter of CAIR (the Council on American-Islamic Relations) to participate in this panel.

In full disclosure, however, I must admit to a certain amount of unease at speaking at the same symposium with so many eminent physicians, nurses, professors, and health care professionals. My disquiet stems from the fact that I do not work in the health care system, and possess little medical knowledge beyond what I have garnered by necessity in dealing with my own medical issues.

As you heard in the introduction, I am the first non-Muslim to head one of CAIR's 30 chapters around the US, and the first Jew to direct a Muslim institution since Dr. Maimonides ran the Royal Medical Department in Cairo for the Muslim rulers of Egypt in the 12th Century.

The journey that brought me to Philadelphia and to CAIR to represent the Muslim community is a story for another time. Suffice it to say for now that I am feel indebted to the Muslim community of Philadelphia for the incredibly warm welcome I continue to receive since relocating here from the canyons of Manhattan four years ago. And given the present state of the republic, there is no other place I would rather be at this tragic moment in American history than working to defend the Muslim community from the current onslaught of malicious misrepresentation and outright bigotry spewing forth from both government and the media.

It should come as no surprise to this audience that today, across the country, the immigrant Muslim community is a community living in fear. But first, some background. Over 200,000 Muslims live in the city of Philadelphia, and contrary to the distorted discourse in the public arena, over 85% of these are not immigrants, but American-born Muslims, African Americans, some of whom are second, and third, and fourth generation Muslims. These statistics should contradict the prejudicial perception of Islam as a foreign faith attempting to foster the "Shariaization" of America upon an unwitting public. And while African American Muslims certainly face anti-Muslim prejudice, that bigotry pales in comparison to the original sin of white supremacy embedded into all facets of American life.

Outside of Philadelphia's borders, another 200,000 Muslims reside in the Greater Delaware Valley. These are mostly immigrants, or children of immigrants, from Pakistan, Afghanistan, India, Bangladesh, and the Arab Middle East.

This population came to this country in great numbers in the last three decades, often with very high levels of education, happily moved to the suburbs and took up well-paid positions in law, business, academia, medicine. This seemingly irreversible validation of the American dream was shattered on the morning of Sept 11, 2001, and then by the open Islamophobia of candidate, and then president, Trump and his rogues gallery of advisers. Expressions of xenophobia and racism, previously considered ill-mannered to utter in the public sphere, were unleashed by the highest official in the land and his clique of white nationalists, anti-Semites, and anti-Muslim activists, and buttressed by Fox, Breitbart, and right-wing radio.

Calls to our office reporting instances of job discrimination, workplace and school-yard harassment, and government violations of constitutional rights have doubled since the start of the last American presidential campaign back in 2015. The national office of CAIR in Washington, DC, has tracked a similar rise in Islamophobia all across the country. Muslim refugees and Muslim immigrants are now the proverbial "canary in the coal mine", and the fate of the Muslim community will foretell, I so believe, the fate of American democracy itself.

It is therefore my opinion that any discussion of immigration and refugee access to health care must take place with a clear understanding of the times in which we find ourselves, a time of Muslim bans and Muslim registries, a time of white nationalists and America-firsters, a time of science deniers and health care cutters.

These free courses can be customized and brought to your institutions anywhere in the greater Delaware Valley Region.

Again, I am grateful for your invitation today, and look forward to your questions and comments.

This item is available on the Militant Islam Monitor website, at http://www.militantislammonitor.org/article/id/7615