This item is available on the Militant Islam Monitor website, at http://www.militantislammonitor.org/article/id/7587

Muslim Council Of Britain: The UK's "CAIR" Partners With The Bank Of England For "Townhall Events"

Iqbal Asaria Al Qaeda Operative & Special Advisor On Business And Economic Affairs For The MCB May Have Arranged Event
September 4, 2017

MIM: The Muslim Council Of Britain is UK the equivalent of the Council On American Islamic Relations. This partnership could quite possibly have been arranged by Iqbal Asaria, an Al Qaeda operative who is an economist working with British banks.

"Mohamed Iqbal Asaria was a member of the working party set up by the Governor of The Bank of England to look into issues relating to the introduction of Islamic financial products in the UK. He was previously a resource person on International Financial Institutions and GATT/WTO for the Third World Network. He provided specialist advice on International financial flows, multi-lateral lending and international trade (1985  1995); and served as Chairman of the influential World Bank  NGO Committee (1985  1990).He is a Fellow of the Chartered Association of Certified Accountants and a graduate of the Victoria University of Manchester where he also completed his masters in Economics (Accounting & Finance). He was awarded the CBE in the 2005 Queen's honours list for services to international development.

Iqbal has advised several financial institutions in the UK and overseas on Islamic financial services. Since 2005, he has been Special Advisor on Business & Economic Affairs to the Secretary General of the Muslim Council of Britain. http://www.takafulsummit.com/2017/speakers/m-iqbal-asaria/

MIM: In 2004 the Muslim Council of Britain a group which is linked to Al Qaeda and Hamas received nearly half a million dollars to have Imams tell Muslims how they can force employers to accomodate all of their religion demands and do Da'wa under the guise of 'working with advisory organisations so they have a better understanding of the employment equality regulations and the Muslim faith'.

MIM: Iqbal Asaria an economist with the Muslim Council of Britain,( directed by Iqbal Sacranie) published and distributed publications for the Committee for the Defense of Legitimate Rights and MIRA - The Movement for Reform in Arabia.The US government has accused Saudi Al Fagih of providing Osama Bin Laden with a satellite phones used to perpetrate US embassy attacks in Africa .The CDLR's 'reform' means replacing the Saudi rulers with a Taliban regime. Al Fagih and the CDLR are now under investigation for their ties to the London suicide bombings. (see below)

Asaria Iqbal, the chairman of the finance and economics committee of the Muslim Council of Britain works for MIRA and the CDLR. He also runs the Webstar internet hosting service which is the UK equivalent of the now the defunct Hamas funded Infonet in the United States. Asaria hosts Al Qaeda websites called Ummah.org ,Jihad.org and Salam.org. Iqbal Asaria was instrumental in getting the HBSC banks to open a department for shari'a banking and is key player in the terrorist network in the UK .

. Which begs the question as to why the Muslim Council of Britain is being considered an ally in the war on terror when they so obviously aid and abet terrorism...http://www.militantislammonitor.org/article/id/815

MCB Partners with Bank of England for Town Hall Events 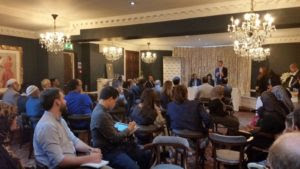 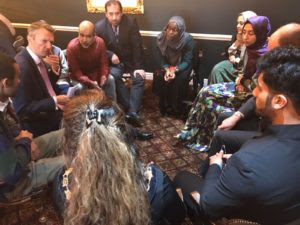 On 4th August 2017, the Muslim Council of Britain organised an event in partnership with the Bank of England, who have embarked on a series of regional Town Hall events across the UK to engage a broad range of society and improve public understanding of their role. The event was held in Leicester which was attended by Muslim community leaders, activists and professionals who all participated in discussions and provided their thoughts and experiences on expenditure, savings and why and how they make decisions when it comes to their money.

Andy Haldane, Chief Economist from the Bank of England, and Navshir Jaffer, Assistant Treasurer of the MCB both hosted and spoke at the event.

Addressing the audience, Mr Haldane said, "We need to understand how the economy is doing..You cannot do that sat in London all the time, at your desk, poring over the numbers in your spreadsheet..The most effective way of knowing what's really going on, getting the colour and texture of the economy, is by getting out and speaking to people about how things are."

The purpose of the Town halls is to engage directly and more extensively with wider communities and seek to understand the issues that matter most to people when making their decisions about saving, spending and working. This intelligence will then be fed back to policymakers at the Bank, including the Monetary Policy Committee.

The Town halls are intended to reach people not previously reached by the Bank. Their aim is to provide a space in which policy-makers can listen, every bit as much as talk.

Read coverage of this event in the Financial Times.

This item is available on the Militant Islam Monitor website, at http://www.militantislammonitor.org/article/id/7587