Bender Plagarizes Quote From Prank Interview In Which Mossad Agent And "Palestinian Academic" Were Punked
January 31, 2017 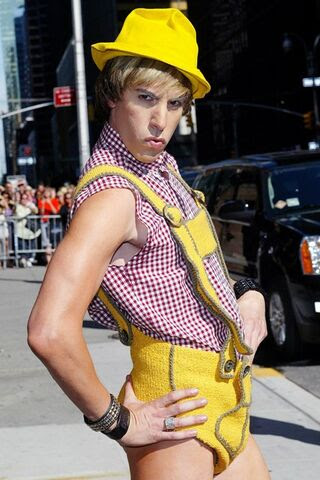 MIM: Baron Cohen's prank where his alter ego gay Austrian television presenter Bruno went viral in 2008. It was one of the most talked about segments of the movie and became a standing joke. Bender's attempt to portray Americans who are concerned about Islamist terrorism as ignorant falls flat when one realizes his remarks are plagarized from a Jewish comedian masquerading as a gay Austrian named Bruno who was able to put one over on a Mossad agent and "Palestinian academic".

"...The widespread ignorance about Muslims in this country at this moment is truly astonishing, with those most loudly condemning Muslims in this country hardly knowing the difference between hummus and Hamas," said Jacob Bender, executive director of the Philadelphia chapter of the Council on American Islamic Relations, who testified in support of the resolution." Read full article at Metro.us

Comedian Sacha Baron Cohen has duped a former Mossad agent and a Palestinian academic into a spoof interview in which they debated the difference between Hamas and hummus.

In the interview, which took place in Jerusalem, Bruno asked: "What's the connection between a political movement and food? Why hummus?"

One of the guests politely explained: "Hamas is a Palestinian Islamist political movement. Hummus is a food."

But Bruno went on: "Ya, but why hummus? Yesterday I threw away my pitta bread because it was dripping hummus. And it's too high in carbohydrates."

He told them: "Your conflict is not so bad. Jennifer-Angelina is worse."

And he baffled the pair with a string of questions including: "Why don't you settle the conflict with a time share on the land?", "When will you Jews return the pyramids?" and "Why can't Jews and Hindus get along?"

Baron Cohen was finally rumbled when he asked the guests to hold hands and sing a crazy song about the Middle East conflict.

Alpher said: "We knew something ludicrous was happening but couldn't quite figure it out."

He accused Baron Cohen of "exploiting our tragic and painful conflict in the most cynical and deceptive manner" but admitted: "The end product will undoubtedly be hilarious. We'll try to be good sports about it."

The Bruno film is due out next May.

Baron Cohen previously duped a host of famous figures in his previous guises as Ali G and Borat.