This item is available on the Militant Islam Monitor website, at http://www.militantislammonitor.org/article/id/7311

Offering a forum to CAIR and AMANA lawyer Wilfredo Ruiz, in the midst of bigotry and terror.

Wilfredo Amr Ruiz is a lawyer for two prominent US-based radical Muslim organizations. One, the Council on American-Islamic Relations (CAIR), has numerous terrorist ties, including ties to Hamas leadership. The other, the American Muslim Association of North America (AMANA), promotes white supremacist David Duke on social media and conducts rallies for Hamas. Given this, why would WPLG Local 10, an affiliate of ABC News, give Ruiz airtime to spout his views? But that is exactly what happened, earlier this month.

On March 13th, WPLG Local 10 news aired a segment criticizing Florida Governor Rick Scott for going on a TV talk show and refusing to answer a question regarding a statement Presidential candidate Donald Trump made about Islam. The piece featured South Florida attorney Wilfredo Amr Ruiz being interviewed by WPLG reporter Bob Norman. On it, Ruiz said that he and others "felt betrayed" by Governor Scott for not speaking out against Trump.

This was not the first interview conducted with Ruiz on WPLG. In December 2015, Ruiz was given a forum to speak on at least two other WPLG segments, both of which involved Norman as well. This is deeply disturbing, given Ruiz's connection to two radical Muslim groups, CAIR-Florida and AMANA, for which Ruiz is respectively the Civil Rights Attorney and Legal Advisor. He is also the founder of AMANA chapters in Puerto Rico and Connecticut and a corporate director for AMANA's sister group, American Muslims for Emergency and Relief (AMER).

CAIR was established in June 1994 as part of a terrorist umbrella group headed by then-global head of Hamas, Mousa Abu Marzook. In 2007 and 2008, CAIR was named by the US Justice Department a co-conspirator for two federal trials dealing with the financing of millions of dollars to Hamas. Since its founding, a number of CAIR representatives have served jail time and/or have been deported from the United States for terrorist-related crimes. In November 2014, CAIR itself was designated a terrorist group by the United Arab Emirates (UAE) government.

CAIR-Florida, the Florida office of CAIR, has thoroughly reflected the extremism of its parent organization. CAIR-Florida Executive Director Hassan Shibly, who has in the past denied that Hezbollah is a terrorist group, wrote in August 2014, "Israel and its supporters are enemies of G-d..." In December 2010, CAIR-Florida CEO and Statewide Regional Operations Director Nezar Hamze repeatedly refused to denounce Hamas, when given several chances to do so, stating "I'm not denouncing anybody. I'm not getting involved in the politics."

AMANA, which is based in South Florida, actively uses the internet to propagate material vilifying Jews, Christians and homosexuals. In one article previously found AMANA's website, it is stated, "Every believer should firmly believe that the Jews and Christians are kuffaar [infidels] and enemies of Allaah, His deen, the Prophet Muhammad, and the Believers The efforts to gain the friendship of the Jews and Christians are useless, as they will never be pleased with the Muslims until the Muslims follow their religion."

The latest posting found on the AMANA Facebook site is an anti-Jewish conspiratorial video taken from the YouTube page of white supremacist and former Ku Klux Klan leader David Duke. The video, which features Duke, is titled Will Israel Assassinate Obama?' In July 2010, the Anti-Defamation League (ADL) condemned AMANA for posting onto the homepage of its official website another anti-Semitic video produced by and featuring Duke. The ADL described the video as being "venomous." The video was posted right above an expose about Ruiz.

In July 2014, both CAIR-Florida and AMANA, along with AMANA's sister group AMER, co-sponsored a violent pro-Hamas rally in Downtown Miami, where rally goers repeatedly shouted, "We are Hamas" and "Let's go Hamas." Following the rally, the event organizer, Sofian Abdelaziz Zakkout, who is the President and Treasurer of AMANA and who has referred to David Duke as "a man to believe in," wrote, "Thank God, every day we conquer the American Jews like our conquests over the Jews of Israel!"

In the WPLG piece about Governor Rick Scott, Wilfredo Ruiz is noticeably upset at the Governor for not speaking out against Donald Trump, but where is his upset for his organization's cursing Jews and Christians or broadcasting David Duke hate videos or sponsoring pro-Hamas rallies? All of this incitement and hatemongering took place under Ruiz's watch and continues to this day.

And what of WPLG's ethical and moral responsibility for enabling someone like Ruiz to promote his radical Islamic agenda on its television network without being challenged? In November, WPLG interviewed AMANA's Sofian Zakkout  who has a lengthy history of radicalism  shortly before Zakkout posted a video to his Facebook page glorifying brutal Palestinian stabbings against Israeli civilians.

Wilfredo Ruiz is a representative for Islamist terror and bigotry and should not be given a forum by any legitimate media outlet. He and his views should be repudiated and the organizations he represents shut down.

If you are concerned about WPLG's unwarranted promotion of CAIR and AMANA's Wilfredo Ruiz, you can contact Bob Norman and WPLG by phone at 954-364-2500 or via email at [email protected] and [email protected]. Please be respectful in any and all communications with this individual and station.

MIM: Note that the speakers include Paradise Afshar who works as a digital editor for WPLG ABC 10 who no doubt was instrumental in getting Ruiz a platform on the station and radical Islamist Imam Sheik Maulana Shafayat Mohamed head of the terror tied Dar Ul Uloom Institute in Pembroke Pines.

On March 22, 2016, CAIR Florida will be hosting a media breakfast. This is an opportunity for media professionals to meet with the leaders of the South FL Muslim community. 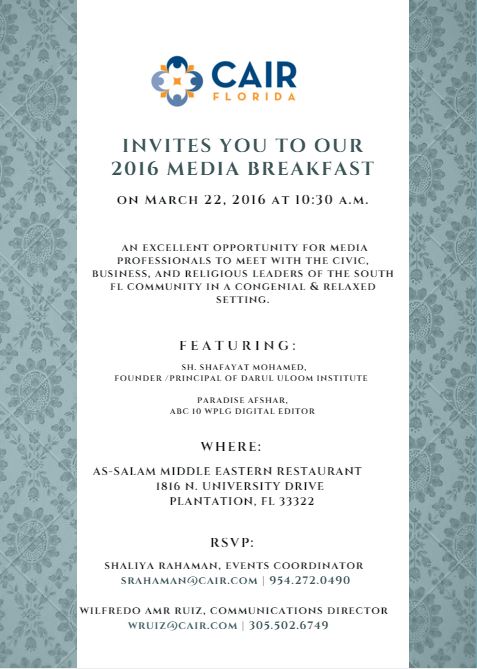 MIM: A report on a CAIR "media breakfast" held in 2014 at the radical Islamic Foundation of South Florida.

The Council on American Islamic Relations Florida, Inc. (CAIR Florida) sponsored a breakfast for media professionals and the South Florida Muslim community at the Islamic Foundation of South Florida on Thursday, June 19, 2014.

The event provided an excellent opportunity for the local media to meet with the civic, business, and religious leaders of the South Florida Muslim community. Both print and broadcast media was represented at the breakfast. The informal setting made for a relaxed atmosphere to network with new contacts and connections and to renew old friendships.

CAIR Florida Operations Director Nezar Hamze gave a short presentation on building better relationship between media and the Muslim community. Other speakers included Kevin Ozebeck of Channel 7 news, Marcelo Sanchez of Hispanic TV, and Shaikh Shafayat, Imam of Dar Ul Uloom. It is extremely important for the Muslim community to build a positive relationship with local Media professionals without fear of being misrepresented.

"The media plays a critical role in shaping our society's narrative on American Muslim relations. We need to get beyond the 30-second spots where Muslims are stereotyped and contextualized as foreigner or the enemy. American Muslims are part of the fabric of this country and contribute to the success of our society. It is the responsibility of the media and the Muslim community to improve the relationship with each other and work to make our society stronger", says Hamze.

The Muslim community also encouraged the media to cover the month of Ramadan just as the media covers Christmas, Easter, and Yom Kippur. Part of living together in peace is understanding each other and our different traditions. With nearly ½ million Muslims living in Florida, it would serve the community well to know about Ramadan.

CAIR Florida will continue to engage media outlets throughout the state, enhance the understanding of Islam, and foster strong relationships with everyone.

This item is available on the Militant Islam Monitor website, at http://www.militantislammonitor.org/article/id/7311