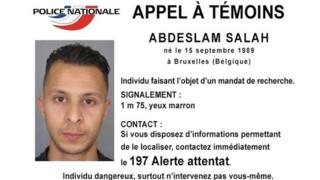 A French man believed to be directly involved in Friday's multi-pronged Islamist terror attack in Paris that killed 129 and injured 352 is being hunted by authorities, French security officials said.

Abdeslam Salah, one of three brothers believed involved in the killings in central Paris, rented the black Volkswagen Polo used by a group of terrorists who killed at least 89 people inside the Bataclan concert hall, one official said.

One other police official said the manhunt involves at least one suspect. One of the suspect's brothers has been arrested in Belgium and another brother was killed in the attack, the first official said.

Three of the seven Islamist suicide bombers have already been identified as French citizens. At least one of seven other people arrested in Belgium in connection to the deadly attacks is also French.

Latest details provide profiles of 5 out of 7 ISIS terrorists who murdered 129 in the French capital, even as others are being hunted down.

Investigators probing the deadly Paris attacks have so far identified five of seven gunmen and suicide bombers whose bodies were found at three sites across the city, while the hunt is on for others.

Here is a look at the men behind France's worst-ever terror attacks, which struck a concert venue, bars, restaurants and a stadium and was claimed by Islamic State (ISIS)

The 29-year-old French national blew himself up at the Bataclan music venue, one of three attackers who murdered 89 people there in the bloodiest scene of Friday night's violence.

His identity was confirmed using a severed fingertip found at the scene.

Born on November 21, 1985 in the poor Paris suburb of Courcouronnes, Mostefai was known to police as a petty criminal with eight convictions between 2004 and 2010 but spent no time in jail.

Between 2005 and 2012, he lived in Chartres, some 90 kilometers (55 miles) southwest of Paris, his former neighbors told AFP, and regularly attended a mosque a few kilometers away in Luce, a source close to the investigation said.

He had been identified by the authorities in 2010 as having been radicalized but had never been previously "implicated in a terrorist network or plot," the Paris prosecutor said.

One of six children, he is believed to have traveled to Syria in 2014, slipping under the authorities' radar.

The father of a daughter born in 2010, Mostefai was understood to have moved to Algeria with his family, his brother told AFP, saying the two had cut ties several years ago. The brother was one of six relatives detained by police as part of their inquiries.

Turkish police twice warned their French counterparts about Mostefai in December 2014 and June 2015 but had "never heard back from France on the matter," a Turkish official said.

The second Bataclan suicide bomber to be identified was 28-year-old Samy Amimour from Drancy, a northeastern suburb of Paris.

He worked as a bus driver for the Paris transport authority for 15 months until 2012, when he became radicalized and known to anti-terror investigators.

He was charged on October 19, 2012 with "conspiracy to commit terrorism" over an attempt to travel to Yemen but was released on bail.

He left for Syria on September 11, 2013, violating the terms of his bail, and prompting judges to issue an international warrant for his arrest.

In summer 2014 he was still in Syria and his family told AFP their hopes of seeing him again faded because he had married there.

Three of his family members were taken into custody early on Monday.

The 31-year-old French national living in Belgium blew himself up outside a bar on Boulevard Voltaire, seriously wounding one person.

He is suspected of hiring a black Seat car, registered in Belgium, that was seen by witnesses at several attack sites and found late Saturday in Montreuil, east of Paris. Inside were three Kalashnikov assault rifles, 11 empty magazines and five full ones.

Dutch media reports said his name appears in police files alongside that of leading Belgian jihadist Abdelhamid Abaaoud in relation to criminal cases in 2010 and 2011. Abaaoud is believed to head a Belgian Islamic State cell, which was dismantled in January, and is thought to be the mastermind of the Paris attacks.

Abaaoud has been on the run since then and is believed to be fighting with the Islamic State group in Syria.

Local media reported that Abdeslam used to run a bar in Brussels' impoverished Molenbeek district, which is known as a hotbed of Islamic radicalism. A police document obtained by AFP suggests it was shut down because police believed customers were smoking marijuana there.

His younger brother, 26-year-old Salah Abdeslam, is being sought by French investigators who have issued a photograph of him - describing him as "dangerous" - while Belgium has issued an international warrant for his arrest.

He hired a black Polo, also registered in Belgium, which was found near the Bataclan concert venue, as well as a black Renault Clio that was found by French police on Tuesday in the north of Paris, not far from the tourist district of Montmartre.

Salah was likely extracted Saturday after a call from one of his accomplices from Belgium, according to police and sources close to the investigation.

The third brother, Mohamed Abdeslam was arrested in Molenbeek on Saturday, but released "without charge" on Monday with his lawyer saying her client had an alibi and was not in Paris on Friday evening.

The 20-year-old was one of three assailants who blew themselves up outside the French national stadium, killing one person, as France was playing Germany in a football friendly attended by 80,000 fans, including French President Francois Hollande.

Investigators say Hadfi was a French national who was living in Belgium and had spent time in Syria.

Close to the body of a second bomber outside the Stade de France, investigators found a Syrian passport in the name of Ahmad al-Mohammad, 25, who was born on September 10, 1990, in the Syrian city of Idlib.

A passport bearing that name had been registered on the Greek island of Leros on October 3, with the attacker's fingerprints matching those taken during the registration process. The holder of the passport was later registered as crossing from Macedonia into Serbia where he formally applied for asylum, Serbian officials said.

But French investigators believe the passport may have belonged to a Syrian regime soldier killed several months ago, a source close to the investigation told AFP on Tuesday.

Serbia detained a migrant on Monday whose passport contained the same data.

AFP contributed to this report.