This item is available on the Militant Islam Monitor website, at http://www.militantislammonitor.org/article/id/622

Iraq food for oil politician George Galloway says he is "proud to call Babar my friend"
May 17, 2005 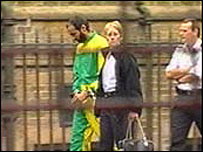 Babar Ahmad, pictured in green, is fighting extradition to the US

MIM: Babar Ahmad was linked to New Jersey Imam Mazan Mokhtar, who was charged in connection with Ahmad and other terrorists in the UK . Mazan was charged with running a website called Minna.org which raised money for Al Qaeda . http://www.militantislammonitor.org/article/id/239

Meanwhile, a New Jersey man is under investigation for having helped a British computer specialist, also arrested in London this week, allegedly solicit funds for a terrorist group by creating and operating an exact replica of the British man's Web site.

Mazen Mokhtar, an Egyptian-born imam and political activist, operated a Web site identified in an affidavit unsealed Friday by the U.S. attorney's office in Connecticut. The Web site solicited funds for the Taliban and Chechen mujaheddin, according to the affidavit. It is an exact replica of Web sites operated by Babar Ahmad, who was arrested in England on a U.S. extradition warrant this week.

The affidavit said the New Jersey home of the mirror Web site operator, identified on a Web site as Mokhtar, was searched in the recent past and that copies of Azzam Publications sites, operated by Ahmad, were found on Mokhtar's computer's hard drive and files.

Officials at the U.S. Immigration and Customs Enforcement office, which is leading the investigation, declined yesterday to comment on Mokhtar or the New Jersey investigation.

Ahmad possessed three-year-old classified routes of a U.S. naval battle group and is believed to be part of a branch of al Qaeda linked to Khalid Sheik Mohammed that authorities on three continents have been working to capture in recent weeks. He allegedly operated two U.S.-based Web sites, one in Connecticut and one in Nevada.

Ahmad, a British subject of Pakistani descent, faces four charges of involvement with terrorism. His attorney, appearing in a British court Friday, denied Ahmad was involved in terrorism.

According to the affidavit, Ahmad "worked in concert" with the New Jersey-based operator of www.minna.com, who is identified on the site as Mokhtar. Mokhtar is described in news reports as a U.S. citizen in his mid-thirties and an outspoken advocate of Palestinian causes. There was no answer at a phone listed at Mokhtar's home Friday or Saturday.

News accounts of rallies where Mokhtar has spoken have also described him as an imam, or spiritual leader, at the Masjid al-Huda mosque in New Brunswick, N.J. He was scheduled to speak later this month in Pennsylvania at a summer camp run by Young Muslims, at a seminar titled "A Few Good Men."

Ahmad is also the cousin of Muhammad Naeem Noor Khan, who was arrested last month in Pakistan. Khan's computers carried detailed surveillance of five financial buildings in New York, Newark and Washington and prompted the Department of Homeland Security to elevate the threat alert level to orange.

Terror suspect facing extradition http://news.bbc.co.uk/2/hi/uk_news/4554829.stm A judge has ruled that British terror suspect Babar Ahmad can be extradited to the United States.

The district judge told London's Bow Street Magistrates' Court it was a "difficult and troubling case".

Mr Ahmad, 31, a computer expert from London, is accused of running websites that supported terrorists and urged Muslims to fight a holy war.

The case has been sent to the home secretary for final approval and Mr Ahmad has the right to appeal.

BBC home affairs correspondent Andy Tighe believes an appeal is likely, in which case the matter would be decided in the High Court.

In claims dating back to 1997, the US government has accused Mr Ahmad of "conspiring to support terrorism", saying he "sought, invited and solicited contributions" via websites and emails.

The US Department of State has claimed that websites run by Mr Ahmad, who is from Tooting, south London, urged Muslims to use "every means at their disposal" to train for jihad, or holy war.

The websites are said to call for support for terrorist causes in Afghanistan and Chechnya, as well as encouraging the transfer of money and useful equipment via the sites.

Lawyers representing Mr Ahmad said he would be at risk of the death penalty if he was sent to the US and transferred to military jurisdiction.

But senior district judge Timothy Workman, who described the matter as "a difficult and troubling case", decided that "none of the statutory bars apply" to refusing extradition.

He said it would be up to Home Secretary Charles Clarke to decide if Mr Ahmad should be sent to the United States.

Judge Workman told Mr Ahmad that he had the right to appeal to the High Court.

Any extradition order would come under UK legislation designed to speed up the extradition of suspected terrorists, which came into force in January 2004.

Under the act there is no requirement for the US authorities to present a prima facie case, although UK authorities must do so in seeking extraditions from the US.

Muddassar Arani, the defendant's solicitor, said the decision had been political and her client made a "scapegoat".

And Mr Ahmad's wife, Maryam, said: "We will fight to the end. We will never give up.

"We believe we are not just fighting for Babar but for any other British citizen who can be subject to such a treaty which is one-way and will deny fundamental human rights."

Iqbal Sacranie, secretary general of the Muslim Council of Britain, said: "If our government has any evidence of wrongdoing on the part of Babar Ahmad then he should be charged in this country and put on trial here."

This item is available on the Militant Islam Monitor website, at http://www.militantislammonitor.org/article/id/622