This item is available on the Militant Islam Monitor website, at http://www.militantislammonitor.org/article/id/5289

"When Anwar Sadat was president, Mursi established "The Egyptian Society for Fighting Zionism," ... "He devoted his whole adult life to serving the Muslim Brotherhood, out of a deep belief in the idea  the renewal of the Muslim state. His opinion has not changed, although he will now strive for a partnership with secular parties" http://www.israelnationalnews.com/News/News.aspx/157189

Egypt has chosen the Muslim Brotherhood to lead the country after former President Hosni Mubarak.

Egypt has chosen the Muslim Brotherhood to lead the country after former President Hosni Mubarak.

The electoral commission made the announcement after delaying the news for more than four days and several recounts.

Tens of thousands of people burst into cheers at hearing the news.

Shafiq, who represented the old regime and who once was head of the Mubarak-era Egyptian Air Force as well, angered the crowds of Muslim Brotherhood demonstrators who camped out in Cairo's Tahrir Square, waiting for news.

Mursi, an Islamist U.S.-educated engineer who once languished in prison upon the orders of Mubarak officials, won with 51.7 percent of the vote, the commission said, in the presidential run-off election that followed the general vote.

He is the first to succeed Mubarak after the January 25, 2011 revolution that ousted the 32-year president who maintained an iron grip on the Egyptian nation.

Mohammed Mursi is declared the winner of Egypt's presidential election

The Muslim Brotherhood's Mohammed Mursi has been declared the winner of Egypt's presidential election run-off.

The White House congratulated Mr Mursi and the Egyptian people for "this milestone in their transition to democracy".

There have been scenes of jubilation in Cairo's Tahrir Square, where Mr Mursi's supporters gathered.

They have been holding a vigil there for days in protest at a series of decrees by the ruling Supreme Council of the Armed Forces (Scaf) which they say are designed to reduce or constrain the power of the president, and entrench the power of the military.

As night fell, tens of thousands continued to throng Tahrir Square. Mr Mursi was due to address the nation in his first speech after being declared president.

Supporters of Mr Shafiq, who had been holding a rally in the capital's northern suburb of Nasser City, were stunned by the result.

There was screaming and crying and people were seen holding their heads in despair.

The BBC's Kevin Connolly in Cairo says Mr Mursi's victory is a moment of profound change for Egypt.

The Muslim Brotherhood that has seen many of its members put in prison, now has one of its leaders being sent instead to the presidential palace, he says.

Security had been tight for the announcement, with tanks and troops deployed around the election commission's headquarters.

A White House statement said: "We believe it is essential for the Egyptian government to continue to fulfil Egypt's role as a pillar of regional peace, security and stability. 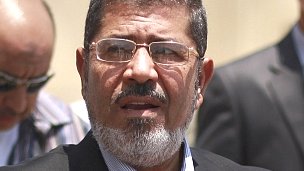 Hours after the result, Mr Mursi resigned from his positions within the Muslim Brotherhood including his role as chairman of its Freedom and Justice Party (FJP) as he had pledged to do in the event of his victory.

Mr Mursi has promised that his leadership will be inclusive, and has courted secular and Christian voters.

Earlier, the head of the Higher Presidential Election Commission, Farouq Sultan, began the news conference by saying the declaration of the result had been "marred by tension and a bad atmosphere".

The military council has ruled Egypt since last year's revolution that toppled former president Hosni Mubarak, and has promised to oversee a transition to democracy.

However, a series of decrees has led many to believe it intends to cling on to power.

On 13 June, the justice ministry gave soldiers the right to arrest civilians for trial in military courts until the ratification of a new constitution.

The Scaf then issued a decree on Friday dissolving parliament in line with a Supreme Constitutional Court ruling that the law on elections to the lower house was invalid because party members had been allowed to contest seats reserved for independents.

Two days later, just as the polls were closing in the run-off, the generals issued an interim constitutional declaration that granted them legislative powers and reinforced their role in the drafting of a permanent constitution. The military was also exempted from civilian oversight.

Then on Monday, Field Marshal Tantawi announced the re-establishment of a National Defence Council, putting the generals in charge of Egypt's national security policy.

The generals have vowed to hand over power to the new president by 30 June, but their decision to dissolve parliament means Mr Mursi could take office without the oversight of a sitting legislature and without a permanent constitution to define his powers or duties.

This item is available on the Militant Islam Monitor website, at http://www.militantislammonitor.org/article/id/5289