This item is available on the Militant Islam Monitor website, at http://www.militantislammonitor.org/article/id/3792

Omar Bakri, the radical cleric banned from Britain, has gone on the run in Lebanon after being accused of training al-Qaeda terrorists. 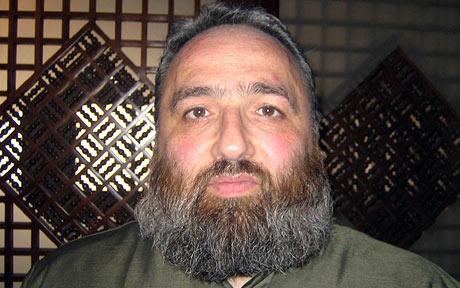 Omar Bakri has gone on the run in Lebanon after being accused of training al-Qaeda terrorists Photo: REUTERS

An arrest warrant has been issued by Lebanese security forces over allegations the preacher gave weapons training to an extremist group called al-Qaeda Lebanon.

Bakri told The Daily Telegraph he had also recently been stopped from using the internet to preach to followers in the UK.

The 50-year-old, who has been living in northern Lebanon since 2005, said that the warrant was issued by a military court, which he said had been encouraged to spy on him by British authorities.

Speaking on a mobile phone from the Lebanon, he said: "I'm on the run and I am afraid I could be arrested and tortured, which is why I have gone into hiding.

"The warrant says that I'm suspected of training people from the al-Qaeda Lebanon group to use weapons but these allegations are completely false.

"The British government is co-operating with Lebanese military intelligence and I have become the bogeyman, a scapegoat for anything they wish to throw at me."

Police have launched several raids on al-Qaeda suspects in Lebanon. Support for the terrorist network is most prevalent in Sunni strongholds in northern and southern Lebanon, particularly the area around Tripoli and Sunni villages along the border between Lebanon and Israel.

Bakri added that the Lebanese government had "no problem with me", but that he was in danger because of his stand against Hizbollah, the militant group that draws from Lebanon's Shia minority.

The extremist Muslim cleric was banned from returning to the UK when he fled his London home following the July 7 attacks. Bakri was a member of the radical extremist group Hizb ut-Tahrir in Britain in the 1980s and early 1990s  and was dubbed "The Tottenham Ayatollah".

Bakri went on to become the founder of the al Muhajiroun extremist movement and caused outrage when he praised the terrorists behind the September 11 attacks in America. Asked if he condemned the disciples of Osama bin Laden, he said: "I condemn Tony Blair. I condemn George Bush. I would never condemn Osama bin Laden or any Muslims."

He later blamed the Government and the British public for the 7/7 outrages which killed 52 people. The outbursts led to the revoke of an order allowing him indefinite leave to stay in the UK.

However he continued to preach to his followers using a website. In November, in a live broadcast transmitted on the internet to a south London community centre, Bakri urged Muslims to "raise the flag of Islam" over No 10 Downing Street.

Bakri, whose 27 year-old daughter Yasmin Fostok was unveiled as a nightclub dancer last year, said that he had agreed to stop using his website after a warning from the Lebanese authorities.

He added that he was now "retired" from speaking out to Muslims against the West.

Bakri also alleged that his car and home had been bugged in recent months.

"I have found monitoring devices in my home and my car," he said. "Lebanese military intelligence told me that they had looked at me for six months but that the file was closed. But now there are these fresh allegations".

Scotland Yard and the Foreign Office denied any involvement. Lebanese authorities did not comment on Bakri's claims. 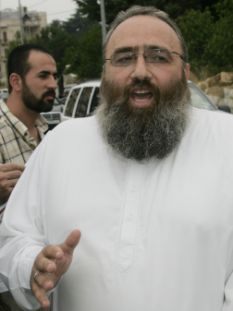 The extraordinary instruction was issued during a bizarre rant posted on an extremist website.

The Syrian-born imam, who is notorious for praising the 9/11 bombers, told Muslims to not only spread the religion across the world, but across the galaxy. He said: 'We are obliged as Muslims to make the whole galaxy subservient to almighty Allah.

'Allah has created all living beings to obey him and worship him.'

A security source is reported to have said: 'Perhaps he could show his people the way - it would give everyone a break if he was beamed up.'

The rant, which appeared on an extremist website, comes after Bakri claimed he had recently been stopped from using the internet to preach to followers in the UK.

This item is available on the Militant Islam Monitor website, at http://www.militantislammonitor.org/article/id/3792