This item is available on the Militant Islam Monitor website, at http://www.militantislammonitor.org/article/id/3730

The death toll in the Mumbai terror attack is expected to soar to nearly 300, Indian officials said, as details emerged of the highly-organised terror plot.

Previous 1 of 7 Images Next

A member of a rescue team covers a room of the Taj Mahal hotel Photo: GETTY 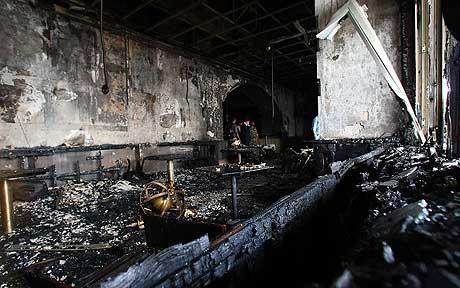 Indian officials have declared the siege at the hotel over Photo: GETTY Many of the rooms in the hotel are burnt out Photo: AP

The body of a suspected militant is taken away at Taj Mahal Palace & Tower Hotel Photo: GETTY IMAGES 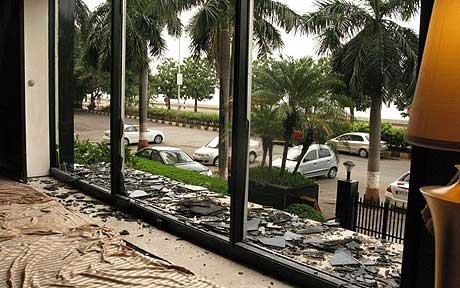 Debris from the attack can also be seen in the lobby of the Trident-Oberoi hotel Photo: REUTERS

Piles of bodies were found yesterday after commandos stormed the Taj Mahal Palace hotel, the last of three buildings that terrorists had occupied in the city. Three terrorists were killed in the battle.

The end to four days of carnage came as tensions grew between India and Pakistan over the atrocity.

It is believed that just 10 highly-trained terrorists took part in the attack. Nine were killed and one suspect is under arrest.

British and Indian authorities were yesterday playing down reports that some of the attackers were British, although this had not been comprehensively ruled out.

The Sunday Telegraph was given the details of a secret interrogation report based on an interview with the surviving terrorist. The 19-year-old suspect, who lived near the Pakistani city of Multan, is said to have joined Lashkar-e-Taiba (LeT), the Islamist fundamentalist group, a year ago. He is alleged to have confessed that he received weapons instruction at a training camp in Pakistan-administered Kashmir. The plot is said to have been planned from there. A group then made a reconnaissance of Bombay earlier this year.

India believes a Pakistani merchant ship was used to transport some, or all, of the terrorists before they seized control of a fishing trawler to reach Mumbai (Bombay). The final leg of their journey was completed in inflatable boats.

Pakistan called an emergency cabinet meeting after announcing that it would not send the country's secret service chief to New Delhi. The Indian government had demanded the head of the ISI travel in person to respond to questions.

Meanwhile, the former head of Britain's SAS has revealed that Britain is not adequately prepared for a Mumbai-style terror attack. He said hundreds of civilians would have been massacred if such an assault was carried out in this country.

The official death toll stood last night at 195, but authorities acknowledge that scores of bodies have not been included in the total. At least 22 of the dead are not Indian nationals, including a Briton, five US citizens and six Israelis. At least 295 people have been injured. Of those, 23 are foreigners, including several Britons.

A final death toll will not emerge until the end of operations to ensure the hotel rooms and corridors are cleared of booby traps. However, S Jadhav, from Mumbai's disaster management unit, predicted the figure would approach 300.

More than 600 people escaped from the Taj Mahal Palace hotel, the Oberoi-Trident hotel and Nariman House, which were held by the attackers.

Lashkar-e-Taiba, the Islamist fundamentalist group, is being widely blamed for the atrocity. Indian investigators claim to have obtained significant leads to synchronised strikes by gunmen from the testimony of the surviving terrorist.

It is believed he and the other terrorists were instructed at the terror camp in Pakistan on how to maximise the number of casualties during an attack, using machine guns, hand grenades and other weapons.

The terror suspect is said to have claimed that he was joined at his camp by four others, most of whom spoke his native Punjabi. All were allegedly given false names before travelling to the garrison town of Rawalpindi, where they were joined by more terrorists.

At Rawalpindi, the 10-man group was allegedly briefed in detail on digitised images of their prospective targets that included Mumbai's two luxury hotels, the Jewish centre nearby and the teeming Victoria Terminus a short distance away. They were also made to memorise detailed street maps leading to these locations.

The group is then alleged to have travelled by train to the eastern port city of Karachi, where they boarded a chartered merchant ship bound for Mumbai. Three different names have been used by the Indian media for the suspect, but none has been confirmed by city police.

Indian commandos said the attackers had demonstrated professional techniques, firing in short bursts, setting traps and even stocking up with almonds and dried fruit to keep their energy up during the fighting.

Commandos brought 300 people out of the five-star Taj Mahal Palace hotel, where the siege ended early yesterday. Some 250 others were rescued from the Oberoi-Trident hotel and 60 people were brought out of the Jewish centre.

Those rescued included a British couple who were among a group of six people who hid for six hours in a toilet cubicle at the Taj Mahal Palace hotel. At one stage, the terrorists searched the darkened area with a torch but did not see or hear them huddled together.

The Pakistani Government yesterday denied involvement in the terror plot and has promised to help in the investigation. However, Asif Ali Zardari, the President, pledged yesterday that he would act swiftly if given any evidence of involvement by Pakistani nationals. "As president of Pakistan, if any evidence comes of any individual or group in any part of my country, I shall take the swiftest of action in the light of evidence and in front of the world," he said.

A team of British police and security officers is also in Mumbai to help with the inquiry, along with American FBI agents.

Gordon Brown said yesterday that the attack had raised "huge questions" about how the world should address violent extremism.

Speaking in London, the Prime Minister said: "A great multi-faithed democracy has been laid low by terrorists. It raises huge questions about how the world addresses violent extremism."

Fires, explosions and gun battles during the siege devastated the 105-year-old Taj Mahal Palace hotel. At the height of fighting, hundreds of people, many of them Westerners, were trapped or taken hostage.

Television pictures of a satellite telephone captured from a terrorist appeared to show a constant stream of calls to Pakistan during the operation. Officials also said they had traced the group's route from recorded GPS co-ordinates on the devices.

All the dead terrorists, as well as the captured alleged gunman, appear to have been born in Pakistan. The group also sent eight operatives on a reconnaissance mission to Mumbai earlier this year, Indian officials have claimed.

Security officials, Scotland Yard and diplomats in Britain played down reports yesterday of a British link to the terror plot. A spokesman for the Foreign Office said: "We have been speaking to the Indian authorities at a high level and they say there is no evidence that any of the attackers are British."

The family of Andreas Liveras, 73, the only known British fatality, told The Sunday Telegraph how he courageously evaded gunmen for eight hours in the Taj Mahal Palace hotel as he frantically tried to reassure his family that he was safe. Dion Liveras, the victim's son, said: "Even now, we find it beyond belief that he went out for a quiet meal  and lost his life.

"He had been able to contact us all by telephone and by text. All the time, he was reassuring us that he was okay. Eventually, however, the gunmen got into the room where my father was and sprayed bullets. He died from multiple wounds."

This item is available on the Militant Islam Monitor website, at http://www.militantislammonitor.org/article/id/3730