This item is available on the Militant Islam Monitor website, at http://www.militantislammonitor.org/article/id/3471

A Jewish community organization has notified police that the Southeast England restaurant targeted in a bomb attack last Thursday was Jewish-owned, The Jerusalem Post has learned. Mark Gardner, director of communications at the Community Security Trust, a charity that provides security for British Jews and represents the community to police, government and media on anti-Semitism and security issues, told the Post they had informed the Metropolitan Police that Giraffe, which has 25 restaurants around the UK, is owned by Jewish partners. "We have made Scotland Yard aware that the restaurant is Jewish-owned," he said. "We can only await further developments, but at this stage there is no reason to believe it is connected." A Devon and Cornwall Police spokesman declined to comment while the investigation was pending. A Scotland Yard spokesman told the Post its agents were only assisting the investigation and it was not their jurisdiction to comment. Police said the bomb contained a lethal mix of nails and chemicals, including sodium hydroxide and paraffin, that could have caused a fireball had it ignited fully.

On Thursday, 22-year-old Nicky Reilly, a recent convert to Islam who police said had a history of mental illness, was wounded when a bomb went off in the Giraffe restaurant at a shopping center in Exeter, Devon. CCTV footage showed Reilly emerging from the café with blood pouring down his face. Police said he suffered serious, but not life-threatening, wounds. Police said Sunday he was in stable condition. Reilly was arrested after the incident and is currently under guard in a hospital, where he is being treated for severe facial lacerations. Police are waiting to question him. No one else was wounded in the explosion at the restaurant, which was busy at the time. Another device, which did not go off, was found outside the restaurant and defused by sappers. On Friday evening, police detained two men linked to the incident in an operation in Plymouth, 75 kilometers west of Exeter. Police are still questioning them. A text message Reilly received before traveling to Exeter is said to be significant to the investigation, and police have said they have CCTV footage showing Reilly boarding a bus to Exeter carrying a rucksack.

"Our investigation so far indicates Reilly, who had a history of mental illness, had adopted the Islamic faith," Devon and Cornwall Police deputy chief constable Tony Melville said in a statement. "We believe, despite his weak and vulnerable illness, he was preyed upon, radicalized and taken advantage of." Reilly was reportedly known to police, who were concerned he had formed links to known extremists in southwest England. "We do not have and have never supported or condoned any radical or extremist behavior," Sayed Rahman, from the Plymouth Islamic Center, where Reilly once worshipped, told the BBC. "This Islamic center is only used for communal prayers

Face of the 'nail bomber': Police were tailing Muslim convert before restaurant attack

The Muslim convert held after a nailbomb restaurant attack had been under surveillance by the security services, it was claimed last night.

Counter-terrorist officers suspected mentally-ill Nicky Reilly had forged links with known Islamic extremists at an internet cafe near his home.

The revelation raised serious questions about how he was able to travel on a bus with 54 passengers for the 44-mile journey from his home in Plymouth to Exeter, where the home-made bomb exploded.

The 22-year old - who detectives believe was exploited by militants - even received a text message of encouragement before setting off on his failed suicide mission on Thursday, say police sources.

The bomb was a 'viable' fireball-type device constructed of drain cleaner, kerosene, strips of aluminium foil and nails.

It was extremely volatile and may have been detonated by shaking. Reilly suffered severe cuts and facial burns when it went off in the lavatory of the Giraffe restaurant in a Plymouth shopping centre.

Police suspect the terrorists who built the bomb, and two similar devices found at the scene, thought they would have been powerful enough to blow out the front of the restaurant - causing untold death and injury. 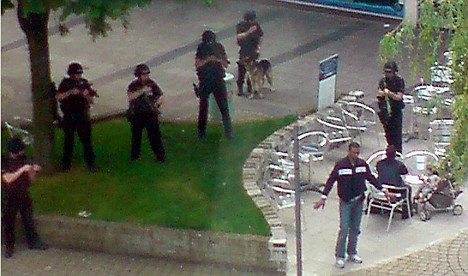 Stand off: Drama outside a quiet city cafe as armed police surround one of the men taken in yesterday in Plymouth

The fact that Reilly, who had changed his name to Mohammed Rasheed, was 'known' to security services has echoes of July 7 bomber Mohammed Sidique Khan.

The leader of the suicide cell, which killed 52 people in London, was monitored by MI5. But he was not considered a priority and slipped through the net with disastrous consequences.

Armed guards stood at Reilly's hospital bedside yesterday as the hunt began for those who turned the 'gentle giant' with a mental age of ten into a bomber. 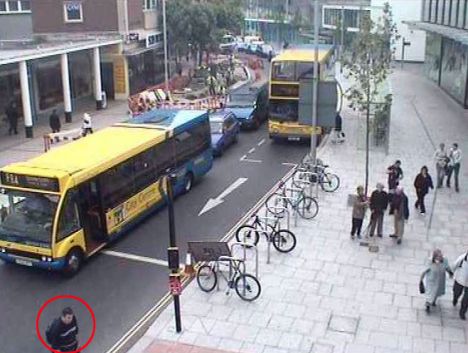 Police with machine-guns and Taser stunguns swooped on two men as they sat drinking coffee yesterday outside a Plymouth cafe.

Witnesses said the men, who were of Middle Eastern appearance and had a child in a pushchair at their side, were searched and put into white paper suits before being driven away.

Reilly, a recent convert to Islam, had a diagnosed mental illness and had been in residential treatment, according to police sources.

The botched Exeter operation mirrors tactics used in Iraq of extremists taking advantage of the mentally or physically disabled to carry out suicide attacks.

Neighbours claimed Reilly, who is 6ft 1in and weighs 18st, repeatedly watched videos of the September 11 atrocity and used the burning Twin Towers as his computer screen saver. It is thought he may have been 'brainwashed' at a fish and chip shop near his home, a first-floor flat in a rundown area. 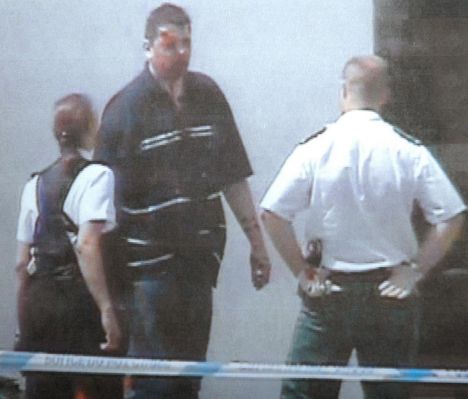 Police, who said Reilly had been 'preyed upon and radicalised', are searching the flat where he lives with his mother Kim, step-father and younger brother.

Neighbours painted a picture of a friendless, reclusive, vulnerable young man who used to collect James Bond model cars but in recent years came into contact with local Muslims.

One friend, 17-year- old Alli Turner, said: 'When the Twin Towers happened he would constantly watch it on repeat. He also had a huge 9/11 poster on his wall.

'He always used to say that he had been told you will get a better life when you die if you are a Muslim.

'He once said he goes to "secret meetings" where no one is allowed if they are not a Muslim.

'Nicky was never into drugs but he was on heavy medication. He tried to commit suicide several times.' 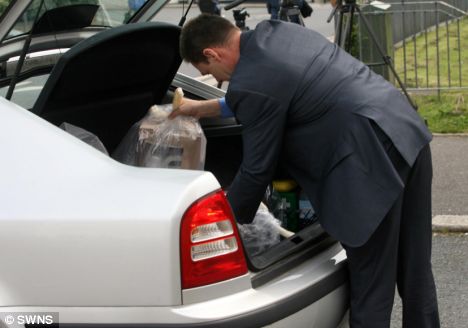 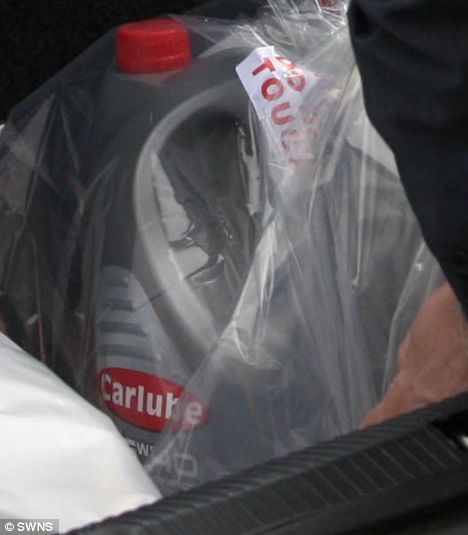 Bottles of car engine oil were removed from Reilly's home

He added: 'Two Sundays ago me and my mum looked out of the window and saw him talking to 12 or 13 Muslim men. They were all in a circle. It must be connected to this.'

Neighbours said Reilly often held meetings at a halal shop and cafe, and a fish and chip shop, both 100 yards from his home.

Bradley Kinsman, 22, said: 'He started hanging out with some Muslims. They were always there talking.

'The halal shop is open until 2am and we'd see Nicky coming and going and being picked up in cars until the early hours.'

Former Plymouth councillor Sylvia Bellamy, who has known Reilly for 16 years, said: 'Someone has pushed Nicky into this because I don't think he could do this on his own. He would follow like a little lamb ... Nicky has the mind of a ten year old, he is a gentle giant.'

Reilly, who attended Lipson community arts college in Plymouth, had been left feeling suicidal after splitting up with his girlfriend, which led him to convert to Islam, said one source. 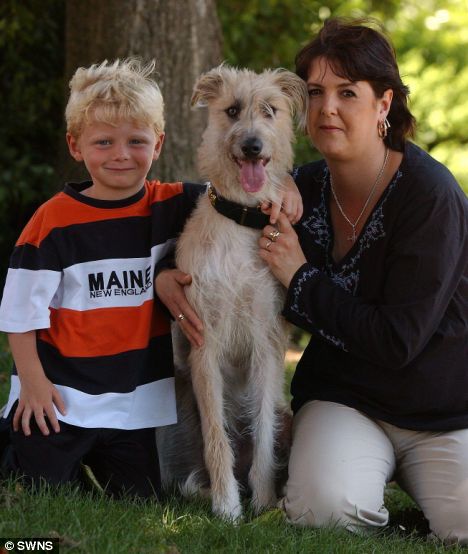 Reilly' mother Kim and her son Elliot with their dog Gypsy-Lou in 2004.

One friend said Reilly could 'fly into rages' if he did not take his medication. Another said he changed his name to Mohammed Rasheed three or four years ago but told him 'English people were allowed to call him Nicky'.

Reilly's brother Luke, 20, is serving a six-year jail sentence for kicking a Polish man unconscious during a robbery to feed his drug habit. His stepfather Philip Dinner, 46, is a convicted drug dealer.

Reilly's mother Kim has a third son, ten-year-old Elliott. All her children have different fathers.

Reilly attended prayers at two Islamic centres in Plymouth. He stood out as the lone English convert at the Islamic Centre for Plyand Cornwall in the Mutley area, said a spokesman. His last visit is thought to have been about seven months ago.

Reilly also visited the Plymouth Islamic Education Trust, a community centre. Its deputy director Abu Moganzy confirmed he had been there at least six times. 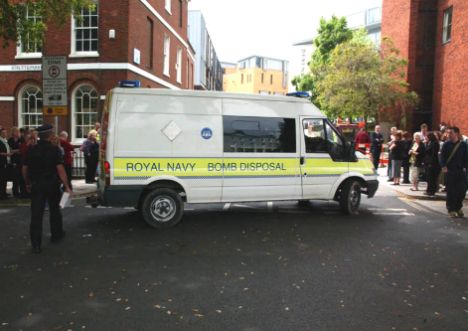 Aftermath: Bomb disposal teams were called in to deal with the devices and, below, parts of the city centre were cordoned off

It is understood Scotland Yard anti-terrorist officers are bemused by Devon and Cornwall Police's rapid decision to reveal the claims that Reilly 'was preyed upon, radicalised and taken advantage of'.

In normal circumstances, officers would take days - if not weeks - before coming to any conclusion about motives.

Police investigating an explosion at a restaurant in Exeter are searching a Muslim centre and a house after the arrest of a third man late yesterday. The properties are in Plymouth where Devon and Cornwall police officers have searched other premises since the attack last Thursday. Assistant Chief Constable Bob Spencer said the searches were linked to the arrest of the man. He declined to release any details of the third suspect or where he was arrested. A fourth man was helping officers with their inquiries. A spokesman from the Muslim community centre said in a statement: "We are as shocked as everyone by the recent events that have unfolded at Exeter and Plymouth. "We have been working in partnership with the police and community to build the centre and we are now committed to assisting the police." Nicky Reilly, a Muslim convert, was arrested after the explosion in the Giraffe restaurant in Exeter's Princesshay shopping complex. The 22-year-old, who recently changed his name to Mohammed Rasheed, was the only person injured in the blast. He suffered eye and facial injuries when a device partially exploded in the restaurant at lunchtime. Police found two other devices nearby.

UK police make new arrest after restaurant blast
Associated Press May 28, 2008 http://ap.google.com/article/ALeqM5ii2618m1YvWZAppSY9xwvE9u3fMwD90UTDIG0 LONDON (AP)  British police in southwest England arrested a third man Wednesday in connection with a restaurant blast that rattled the English city of Exeter last week. The apparently botched attempt to bomb a crowded family restaurant Thursday prompted the evacuation of a large part of the coastal city's center, but the only person injured was prime suspect Nicky Reilly. The Muslim convert was seen entering the restaurant's bathroom shortly before the explosion and a photograph later released by police showed a bloody-faced Reilly being approached by police. Local police have said Reilly had been manipulated and radicalized, explaining that the 22-year-old had a history of mental illness. On Friday heavily armed police swooped in on a second suspect in the nearby city of Plymouth, where Reilly lived. That man has not been identified. Counterterrorism authorities are still trying to determine who else, if anyone, was involved in the bombing. It was not clear from the police's statement where the third and latest suspect was apprehended, but it said the Muslim Community Center in St Jude's, in Plymouth, was being searched in connection with the arrest. The center said it was shocked by the recent developments and, in a statement released by police, said it would help authorities with their investigation. Both Reilly and the man arrested Friday remain in custody.

This item is available on the Militant Islam Monitor website, at http://www.militantislammonitor.org/article/id/3471