"Militant Islam is the enemy - even it's slickest adherents must be viewed as such"
October 29, 2004 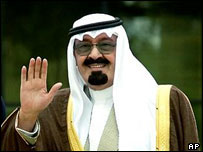 MIM: On October 13, 2004 Abdulrahman Alamoudi,the head of the American Muslim Council,was sentenced to 23 years in jail for his part in a scheme to assassinate Prince Abdullah at the behest of Libyan leader Muhammed Gadhafi. In a scheme which Dr.Daniel Pipes described both as "James Bond " and "Mickey Mouse" style drama" :