This item is available on the Militant Islam Monitor website, at http://www.militantislammonitor.org/article/id/295

ICNA thanks Allah for making Muslims Only day " a huge sucess' plans to "make the next one even better "
October 5, 2004

"The Great Muslims Only Adventure Day "

So exciting! And No Jews!
http://www.blogsofwar.com/archives/2004/09/15/the-great-muslim-adventure-day/

MIM: Blogs of War and others comment on Muslims Only Day at Six Flags amusement park

.Click on the URLs below for the websites and complete postings.

The Islamic Circle of North America thanked 'Allah' for making the Muslim Only Day a "huge sucess."

""Jazakum Allahu Khairan for making the Great Muslim Adventure Day a huge success. All this would have not been possible without the guidance, help and blessings from Allah SWT. We thank Him in granting us successes. May Allah SWT forgive us for all our mistakes and mailings and accept all that was right and reward us all."

MIM: It indicitive of the Islamic Circle of North America's sociopathic weltaanschauung that they posted these 'anti discrimination hotline' phone numbers next to the article on Muslim's Only Day. 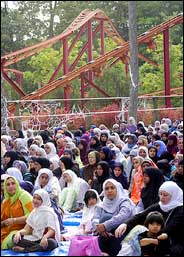 "Alhamdulillah, more than 15,000 attended the largest Muslim gathering of the North East.

Send us your feedback and suggestions to make it better the next time around!

Also do not forget to send us pictures from the event.

Volunteer and support our activities. Contact ICNA-NJ at [email protected].

MIM: Andrew Jaffe at Israpundit questions if entrants to the park would have been forced to recite verses from the Koran

Jaffe mentions Time magazine's reference to MIM which was described as "the cottage industry that monitors Muslim websites..." (!)

In the September 20 issue of Time Magazine, author David Van Biema/Jackson writes very flippantly about a "Muslims Only" event held at Six Flags in New Jersey. He seems irritated that anyone would raise objections to religious segregation at a public amusement park.

Before objections were raised, just how did the event's organizers, the Islamic Circle of North America (ICNA), plan to enforce Muslim-only entrance to Six Flags? By the way people dressed? By their skin color? Would entrants to the park have been forced to recite verses of the Koran? Were Jews wearing yarmulkes and Christians wearing crucifixes to be turned away?

Is it somehow different if Muslims try to enforce segregation? Should Americans now allow political correctness to undo all the work of the civil rights movement? What Mr. Van Biema/Jackson so nonchalantly deems to be "fun" is sadly a step back for America's progress in treating all its citizens as equals.

Controversy erupted when Muslims went looking for fun, but the event was a moment of harmony.

The "controversy" had nothing to do with Muslims having "fun." It had to do with the ICNA exclaiming on its website,

Exclusively? According to WorldNetDaily.com,

Six Flags has previously hosted other event days, including an annual Passover theme in which the park is predominantly filled with Orthodox Jews, but the venue is still open to outsiders and seasonal ticket holders, and organizers of previous events have never claimed exclusivity of the park.

Van Biema/Jackson goes after all us "crazies" (average Americans who don't want to see their country destroyed):

This being post-9/11 America, however, everything Islamic becomes a statement. The cottage industry that monitors Muslim websites publicized the event to a distinctly nonMuslim-friendly audience last week, emphasizing ICNA's alleged connections to terrorists and Islamic fundamentalists. (A Six Flags spokeswoman said the FBI assured her firm that "there is no link between the ICNA and terrorism." The group denies any.)

Oh, all us bad bloggers. Maybe Van Biema/Jackson is worried because more and more people are turning to alternative media. Maybe we're tired of the politically correct editing of the news. Wasn't it bloggers who brought out the truth about CBS's forged documents? And what about WorldNetDaily.com's investigative reporting of ICNA which revealed:

The ICNA has drawn much controversy to itself in recent years. WorldNetDaily attended a conference in Orlando, Fla., sponsored in part by the ICNA, which featured a main speaker who voiced empathy and support for suicide bombers, denied Muslims were involved in 9-11, characterized the war on terror as a conspiratorial Zionist plot designed to destroy Islam and Muslims, and blamed attacks on affirmative action on "the rise of the Jewish cracker."

Judicial Watch says the ICNA has ties to Hamas, and terrorism expert Steve Emerson stated: "The ICNA's hatred of the Jews is so fierce that it taunted them with a repetition of what Hitler did to them."

I'm not so sure we can trust the FBI anymore. But the main point here is that Van Biema/Jackson misses the point completely. For him, a Muslim-only event is fine. Imagine his reaction if Six Flags held a "Whites-only" event.

Cross-posted at IsraPundit and netwmd.com

From' Blogs of War'

And they'll also boot you out of Six Flags Great Adventure on Friday if you're an infidel.

An interesting snippet from the vendor agreement:

An Islamic group is backing off its boast of a Muslims-only day at a popular theme park, just hours after WND brought to light plans for the "Great Muslim Adventure Day."
- WorldNetDaily

From the Free Republic - Six Flags announced an Anti - Bush protesters only day ....

Six Flags Amusement Parks announced an Anti-Bush Protesters only day at their Parks across America after success of Muslim's only day.

Michael Moore, spokesman for the event states that it will be a great opportunity for others to see how the second of the two Americas lives.

A special concert is planned at the Vallejo, California (Near San Francisco) location.

Performing as a barber shop quartet will be Barbara Streisand and the Dixie Chicks. Additionally, Cher has decided to kick off her fifth farewell concert tour at the event.

The Grand Finale of the evening will be a speech given by Franklin Delano Roosevelt, who will be channeled through the body of Shirley MacLaine.

It is rumored that a special appearance by Elvis will be made after FDR leaves. We will just have to wait and see on that.

LOL...when I initially saw your title I thought I'd finally entered The Twilight Zone...it's so funny because it isn't far from reality.

The Muslim Youth Division of the Islamic Circle of North America and the Muslim American Society, two of the largest Muslim organizations in America, had said they arranged exclusive use of Six Flags Great Adventure in Jackson, N.J., for the entire day Friday. The ICNA website declared, "First Time Ever  All Day  Entire Park Exclusively for Muslims!"

Only after a burst of public outrage was the attendance ban on infidels lifted.

The New York Times has run a characteristically sympathetic piece on the Muslim gathering.

The last week has been fraught with threats and racial epithets lobbed at the Islamic Circle of North America, the group that rented the park for the event, and the corporate offices of Six Flags Great Adventure.

Note that no one at ICNA was kidnapped, beheaded, or blown up.

A lot of [Muslims] don't feel safe [...], because of our dress standards, they might be afraid of being taunted. There's a lot of hostility out there.

Yes, you heard that right, adherents of the Religion of Peace Bombings and Beheadings are afraid of being ... taunted.


This item is available on the Militant Islam Monitor website, at http://www.militantislammonitor.org/article/id/295