This item is available on the Militant Islam Monitor website, at http://www.militantislammonitor.org/article/id/2225 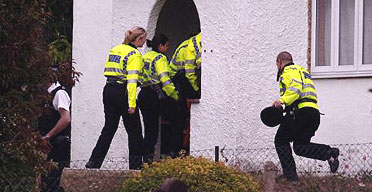 The Bank of England named and froze the assets of 19 of the 24 air terror suspects today.

Acting under the instruction of the chancellor, Gordon Brown, and on the advice of the police and security services, the bank froze the assets of 19 of those arrested yesterday in connection with an alleged plot to blow up passenger jets leaving UK airports for the US.

It acted under powers granted by the United Nations to tackle the financing of terrorism in the wake of September 11.

The oldest of the named suspects is 35 and the youngest 17. Thirteen are from east London - nine from Walthamstow, one from Chingford, one from Leyton, one from the Limehouse and Poplar area and one from Clapton.

Four are from High Wycombe, Buckinghamshire, and the other two are from Birmingham and Stoke Newington, north London.

More suspects may have their assets frozen, said Treasury spokesman Nic Stevenson. "The list may grow bigger as the process evolves," he said.

In Pakistan, a senior government official confirmed that seven people had been arrested in connection with the plot, including two British citizens.

The arrests were made in the eastern city of Lahore and in Karachi, Pakistan's main port on the Arabian Sea.

Rasheed Ahmed, a member of the Pakistani government, confirmed that the country's intelligence agencies had passed on information about the plot obtained from people - including British nationals - arrested in Pakistan.

"Mostly they were British national and Pakistani religious people who have been arrested before and from there our agencies got some clues and that was shared with the British and American agencies," he told the BBC's Today programme.

Two of the men arrested in Britain on suspicion of being involved in the plot were converts to Islam. Ibrahim Savant, from Walthamstow, east London, changed his name from Oliver when he converted, according to neighbours.

The 25-year-old student, whose Muslim wife is reportedly pregnant, was arrested at his family home in Folkestone Road.

Another convert was called Don Stewart-Whyte until he changed his name to Adbul Waheed after converting to Islam around six months ago. The 21-year-old was arrested during a raid at a house in Hepplewhite Close, High Wycombe.

Another of those arrested in Walthamstow was said to be a young mother, though Scotland Yard has not officially confirmed this.

Imtiaz Qadir, from the Waltham Forest Islamic Association, said the woman was in her early 20s and had a six-month-old baby.

"A young Muslim lady was arrested, and she has a six-month-old child," he said. "They have taken the child too, because it needs to be with its mother."

Mr Qadir added: "I know five of the men very well and they are really respectable young Muslim men. I am totally shocked. I don't believe they've done anything to warrant this."

Peter Clarke, head of Scotland Yard's anti-terrorist branch, has said all the arrests were made on suspicion of the commission, preparation or instigation of acts of terrorism.

Under new anti-terror laws, police have up to 28 days to question the suspects before deciding whether to charge or release them.

Ed Balls, the economic secretary to the Treasury, said accounts held by the 19 named suspects with UK financial institutions had been frozen until further notice.

"The Treasury will review the need for further use of our asset-freezing powers as we receive further advice from the police and security services," he said.

In a statement on its website, the Bank of England said it had directed that none of the frozen funds "should be made available, directly or indirectly to any person, except under the authority of a licence".

It added: "Financial institutions and other persons are requested to check whether they maintain any accounts or otherwise hold any funds, other financial assets, economic benefits and economic resources for the individuals named and, if so, they should freeze the accounts or other funds and report their findings to the Bank of England."

Here are the names, released today by the Bank of England, of 19 of the 24 arrested airline terror suspects who have had their assets frozen on the orders of Chancellor Gordon Brown:

Comment and debate
John Williams: The battle for hearts and minds
Rachel Briggs: The heat of the moment

This item is available on the Militant Islam Monitor website, at http://www.militantislammonitor.org/article/id/2225