This item is available on the Militant Islam Monitor website, at http://www.militantislammonitor.org/article/id/2162

Douglas Murray: "This is a conflict between free people and terrorists - not a fifty fifty event" 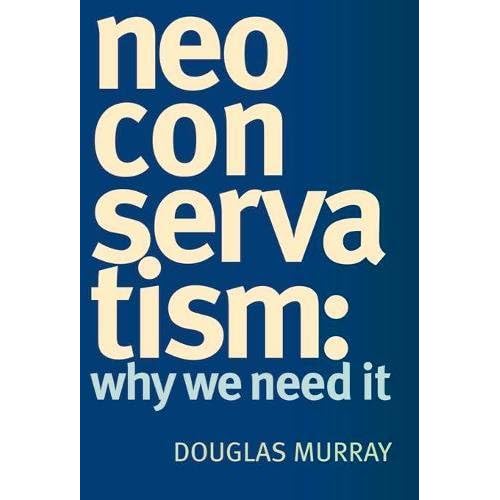 Murray: Thank you for having me.

FP: What motivated you to write this book?

Murray: Anger, mostly. Though a good deal of irritation too. Irritation at basic - as well as specific - errors which have gone unchallenged for too long.

In particular among my generation in the West, the understanding of war, peace, history and human behaviour now seems so fundamentally skewed and misguided that I felt I had to help sort some of this mess out. And I wanted to go back on the front foot - to direct attention onto those who have largely escaped the pummelling they deserve. So as well as being a philosophical and practical explanation of Neo-conservative action, this book is a fierce attack on our enemies without and within. It hits the ball back into the court of freedom's opponents - smoking a few of them out along the way.

Murray: Well the best description has always been Irving Kristol's - that a neocon is 'a liberal who has been mugged by reality'. But the truth is that plenty of present-day 'neocons' never were liberals, so there's now a technical problem in the description. And of course 'liberals' are no longer liberals.

Lots of people simply think neocons are the hardline section of the Republican party. Which isn't true. Neither Dick Cheney nor Donald Rumsfeld are neocons.

I say that neocons are people who see the world as it is, but act to make it as they would like it to be. This makes us different from traditional conservatives (who often distrust ideological drive) and present-day 'liberals' (who don't see the world as it is). Neocons look at the world through classically liberal eyes, but wear good glasses. A neocon is a realist with morals, or a moralist with good eyesight.

FP: So a Neo-con is much better at fighting political war than a Conservative right? Why do you think that Conservatives are so bad at political fighting?

Murray: No - I don't think neocons are necessarily better at fighting political wars. Our PR would certainly suggest not. But when it comes to actual wars, neocons have undoubtedly been better (though not necessarily any more successful) at explaining - for instance - Iraq, than have traditional conservatives, who rarely explained the manifold humanitarian as well as military reasons for toppling the Hussein dictatorship.

But conservatives of all stripes have been pretty poor at arguing their corner in recent years. This has led to a general trend where the 'left' is regarded as the movement of 'progress' and the 'right' as a movement existing to (at best) only slow down the set pace. My book argues that it is conservatism which should set the pace.

The left has never felt the need to apologise or recant for giving us the horrors of socialism. In fact, worse than that - they still extol that vile creed. A lied-to new generation thinks left-wingery is about peace and love, while the right is concerned only with hate and so on. This is because of a grass-roots problem. The left has continued to fight a grass-roots culture war, which the right has largely given up on. There are noble exceptions to this, of course, but it seems to me that conservatives of all kinds would do well to fight the culture wars on our own terms. Again - we should be on the front-foot. I mean who has more to apologise for in Britain - a free-marketeer who supported Thatcher, or a goon of the Soviets who propped up communism? In Britain, as in America, it's too often the glad fool who gets away with it, and the free-marketeer who is left feeling defensive. We should work to change that.

FP: Are you a Neo-con? Name some prominent individuals that are Neo-cons and the qualities you think that make them such.

Murray: Of course! I wouldn't have written this book - with this title - if I wasn't one.

George Bush has been a foreign-policy neocon only on and off since 9/11. His 2005 inaugural address was perhaps the high-point. Secretary Rice and others have also flitted in and out of the camp. Democracy-spread has become a core-part of their policy, but I see worrying signs over their treatment of Iran and Syria in particular, which suggest to me that the instinct isn't quite as deep as one might have hoped.

Of the sustained neocons, none is a better example than Tony Blair. His axiom before the Iraq war on toppling dictators 'When you can, you should' seems to me a perfect neoconservative expression. But, that said, he is not remotely a neocon on domestic matters (which I go into at some length in my book) - not even on the domestic war on terror. It's purely a foreign policy thing with him.

There are of course a number of writers who I would say are great examples of neoconservative thinking. From very different directions, Christopher Hitchens and Charles Krauthammer spring to mind. But again it's worth pointing out that whenever you get more than one neoconservative in a room they're as likely to disagree as agree with each other. It's not a doctrine or fraternity - simply a way of looking at the world which, in my opinion, is particularly relevant to the world in which we live.

FP: What are some myths about Neo-conservatism? Why do some charge it as being a "Jewish cabal"?

Murray: Well the myths are too many to mention, but I try to bust many of them in this book. The notion that neocons are a sinister power-cult at the top of the American government is of course conspiracist lunacy. As is the accusation that neocons are bent on world domination. Only in such a moronic age could the allegation that freeing a country from a dictator constitutes 'empire-building' be taken even half-seriously.

And as for the Jewish cabal. Well we all get this. I was asked again recently whether I was Jewish. I pointed out that my Scottish name didn't exactly suggest so, but was told it looked like 'one of those names a Jew has changed to make themselves look non-Jewish!' So you see, you can't win. And anti-Semitic slurs in time of war are of course sadly perennial.

But to answer the substance of the question - lots of first generation neocons were Jews, though just as many weren't. But it seems fairly obvious to me why a Jewish person might be particularly attracted to neoconservatism. Many Jewish people have a strong sense of what is right and wrong which is now lacking from vast swathes of the West. And of course Jewish people are more than usually likely to sympathise with the lot of people living under oppressive and genocidal regimes, and understand the need to address humanitarian crises before they reach their end-point.

FP: You argue that the West needs Neo-conservatism more than ever. Why?

Murray: Because the West is getting lost. Not just the Western way of life - which is increasingly becoming little more than a 'lifestyle choice'. But lost in the sense that it is forgetting what it believes in and therefore why it should even believe in itself. A combination of historical ignorance and moral posturing has led to what Ratzinger called the 'dictatorship of relativism'. In this situation moral clarity - which is one of the things neoconservatism provides - is desperately lacking. And I think this situation is dangerous. Dangerous because into this vacuum any of the worst creeds can stalk. Relativism's descent into nihilism is not the end of the problem. It is the beginning of it.

So we need to explain to people that it isn't enough to sit back when something bad happens to us and say 'well we once did x, y, or z.' Or to continually draw parity between democracies and tyrannies - or terrorists and free states. We have to persuade people that self-flagellation and a historical posturing are not expressions of intellectual and moral worth, but a substitute for them.

Neoconservatism - as explained in this book - provides a way out of the mental and moral inertia which now prevails and which allows people to think they are good human beings because they once went on a march to stop a tyrant's overthrow, or feel they 'understand' what drives a Palestinian terrorist to become a Jew-murderer.

FP: What perspective does/should Neo-conservatism have -- in general -- on the war breaking out in the Middle East right now and on the terror war in general?

Murray: Well I hope the war isn't 'breaking out', but rather coming to a close with a complete operational success for the IDF. The idea of this escalating from a war with a state-proxy into a war between Israel and one or more states is terrible. That said, if Iran and Syria continue to flaunt their sponsorship and support of terror then it becomes not just a duty, but a necessity, to deal with them. Whenever they get away with an attack or a snub, they are emboldened. At present they calculate that we do not have the stomach to enter another fight. Whether this is the case or not, we cannot allow this presumption to perpetuate. It is, as so often, our weakness which is a provocation.

I've just got back from the region, and while there I witnessed - and experienced - the rocket bombardment in Northern Israel, as well as the terror of the people of Tel Aviv and Jerusalem where suicide bombers have been caught in recent days about to detonate.

We must emphasise that parity does not exist when there is a war between a democratic state and a terror organisation. This is something that large swathes of the media - and the UN - simply cannot understand. Such a conflict is not a 50/50 event. And the scales do not tip against Israel because Israel has suffered fewer casualties to date. You do not decide who is right by affecting a body-count. Germany lost more troops than Great Britain in the last World War, but it didn't make Germany right. Would those who talk so idiotically of disproportionate response against Hezbollah be happier if more Katyushas were making direct hits on Israeli citizens?

Any decent person must emphasise that this is a conflict between free people and terrorists - an army that does everything it can to limit civilian casualties and an organisation whose aim is to maximise civilian casualties. Between two such sides no equivalence can be made.

The battle will - and must - be over only when Hezbollah's weaponry of terror is entirely destroyed. Neither the US nor any other ally of Israel should demand a ceasefire at any date before the time of Israel's choosing. If they do demand it, Israel should ignore it. A ceasefire which returns us to the status-quo ante would be a temporary ceasefire which would make the sufferings of recent weeks and months not just pointless, but perpetual.

The conflict currently going on is a local version of the war in which we are all engaged. Trace back just one step, in Iraq, Lebanon, London or New York, and you get the same story, and the same ring-leaders. Israel's war is our war, and we should be proud that at least one of our allies is successfully fighting this war for us as well as for themselves. Victory for Israel against Hezbollah will be a victory for all free peoples, not least the people of Lebanon.

The Hezbollah are already holding one country - Lebanon - hostage. We cannot allow them to hold another country - Israel - hostage as well. A draw in this conflict will be a loss for Israel, and neither Israel, nor the West as a whole, can afford any losses in this global war against Islamist terror.

FP: Douglas Murray, thank you for joining us.

This item is available on the Militant Islam Monitor website, at http://www.militantislammonitor.org/article/id/2162